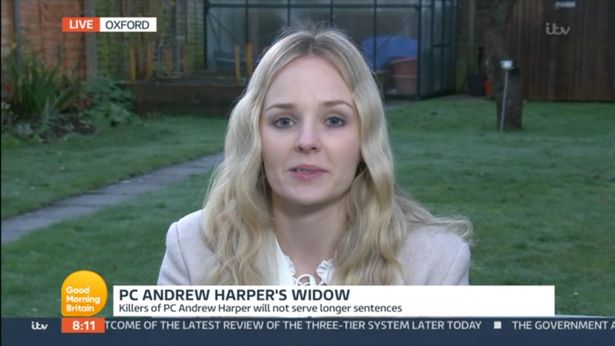 PC Andrew Harper’s widow Lissie Harper’s “priority” is to get Harper’s Law in front of MPs.

The wife of the policeman is grieving after the officer was dragged to his death behind a car, whilst trying to stop criminals, last year, at age of just 28.

Yesterday, Lissie found out that the Court of Appeal refused to increase his killers’ sentences – which mean they may be out in as little as eight years.

And as Lissie’s legal options came to conclusion, as there are no more chances for appeal, she appeared on Thursday’s Good Morning Britain to share that she is pouring all her energy into fighting for killers of 999 personnel be jailed for life through Harper’s Law.

Speaking to Kate Garraway and Ben Shephard, from Oxfordshire, Lissie said she it is “not right” that an emergency service worker’s life can be taken and “justice not be served.”

PC Harper, a 28-year-old Thames Valley Police traffic officer, was dragged to his death down a winding country road when he was caught in a strap attached to the back of a car driven by Long, now 19.

Long, the leader of the group, and passengers Cole and Bowers were fleeing the scene of a quad bike theft in Sulhamstead, Berkshire on the night of August 15, 2019.

Long admitted manslaughter, while Cole and Bowers were convicted of manslaughter after a five-week trial at the Old Bailey.

All three were cleared of murder by the jury, which deliberated for more than 12 hours.