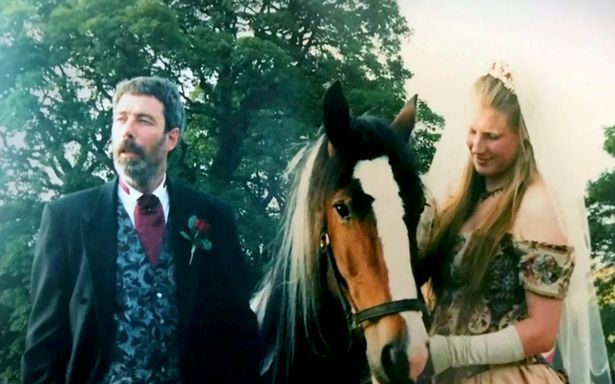 In a special episode of Channel 5’s Our Yorkshire Farm, Amanda Owen and Clive shared an unseen wedding picture from 2000.

The 46-year-old shepherdess married Clive, 20 years her elder, in a rural setting even though neither her co-star nor herself had originally come from a farming background.

This has not stopped the father-of-eleven and his wife from living at the famous Ravenseat farm for 25 years.

The Yorkshire Farm stars looked completely unrecognisable in the wedding photo they shared.

Amanda was photographed wearing a Bardot-style shoulder-less gown, while Clive was sporting a flamboyant suit with a patterned waistcoat, along with a burgundy cravat.

Clive was married before meeting Amanda in the late 1990s and had two children with his ex-wife.

However, he has remained inseparable from his farming partner since 1996.

Nevertheless, living on a farm with a history that goes back 1,000 years has had its ups and downs for the pair.

Earlier this month, Amanda shut down a rumour that bird flu had spread across her farm.

She slammed the claim as she told a concerned viewer that the farm had “Never had or got flu”.

This came as a result of an episode showing the farmer’s son, Miles, expressing his worry about their free-range chicken’s health having to take them inside.