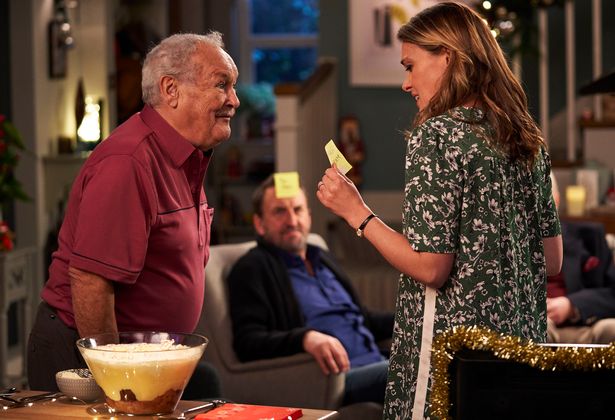 Not Going Out viewers were left ‘in ‘tears’ after the late Bobby Ball posthumously appeared in the BBC show’s Christmas special on Wednesday.

The 76-year-old comedian died on October 28 after being admitted to Blackpool Victoria Hospital with breathing problems following testing positive for coronavirus.

Bobby plays Frank in the BBC sitcom, who is the father of comedian Lee Mack’s character, and he filmed the festive special and the upcoming 11th series before his untimely passing.

Dozens of viewers took to Twitter to praise Bobby’s performance and said that the show was a fitting tribute to the comedy legend.

They tweeted: “Brilliant job @LeeMack and cast, #NotGoingOut on @BBCOne was hilarious, bittersweet to watch the late, great Bobby Ball, but a lovely tribute to him at the end there! That humour was exactly what the Country needed today! Thank you!”

After Bobby died in October, Lee Mack was among those that led tributes to his co-star, writing at the time: “I’m utterly shocked and devastated to lose my mate Bobby like this.

“I filmed with him just a few weeks ago and he was his usual funny and cheeky self.

“My thoughts are with Yvonne and his family and of course Tommy.

“To get to work with one of my childhood comedy heroes was great. But to call him a friend was even better. Rest In Peace Bobby x”.