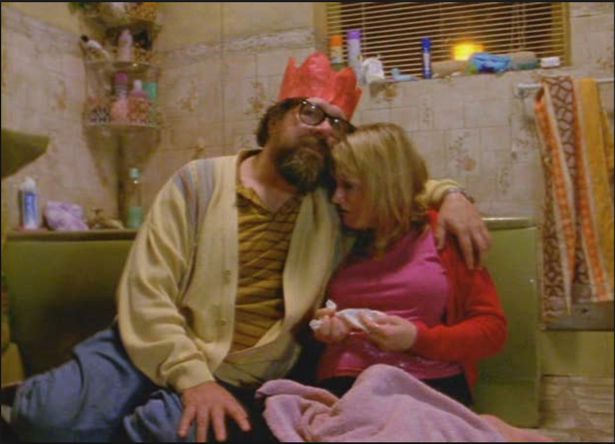 The Royle Family is one of the greatest ever British sitcoms – but the comedy also managed to tug at our heartstrings.

The original series ran from 1998 to 2000 – with five special episodes airing from 2006 until 2012 – coming from the genius minds of Caroline Aherne and Craig Cash.

And it was an emotional scene during the 1999 Christmas special that left the cast and crew shedding real tears.

Denise Royle, who was played by the show’s creator Caroline, went into labour in the bathroom on Christmas Day.

Lazy Jim finally got out of his armchair after discovering his daughter’s waters had broken while mum Barbara frantically tried to call the hospital.

In the tender scene, Ricky Tomlinson’s character put his arm round crying Denise in a rare display of affection, before asking the most ridiculous question.

Ricky had a painting of Caroline commissioned, and loved it so much that he had the artist do another one for Sue, which is the first thing she sees every morning.

“For me, she was the most generous of women and that showed in her spirit,” said Sue.

“She was very funny, naturally funny, but her generosity was extraordinary.

“At the end of a week’s filming there would be a table laid out with champagne, beers, sweets for the crew and everyone, she spoiled everyone.”

Sue also revealed a cheeky behind-the-scenes secret during filming of The Royle Family that Caroline implemented.

“Sometimes, what used to make me laugh – especially these days – we’d get to about Thursday and we’d been constantly filming and on that sofa and she’d suddenly call the producer over and she’d go, ‘John, I think we’ve all gone a bit flat, I think we need champagne!’

“And it would come! We’d be drinking champagne in those mugs.”