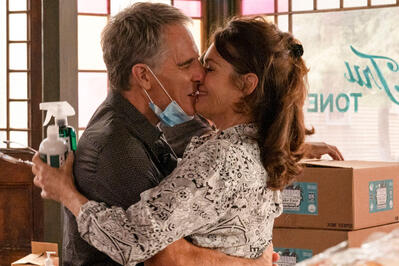 [Warning: The following contains spoilers for Season 7, Episode 2 of NCIS: New Orleans, which aired on Sunday, Nov. 15. Read at your own risk!]

NCIS: New Orleans returned for its seventh season on Sunday, November 8, and Sunday, November 15 with a two-part episode called “Something in the Air.” In it, the team investigated a suspicious death on an offshore humanitarian ship that ended up having serious repercussions in terms of the COVID-19 pandemic, Dr. Wade (CCH Pounder) was overwhelmed at the morgue because of coronavirus deaths, and Pride (Scott Bakula) struggled to figure out what to do with his shuttered bar, with Jimmy Boyd (Jason Alan Carvell) figuring out how to use food from shuttered bars and restaurants to form a food pantry to help those in need.

The one bright spot in the two-part episode is that Pride’s longtime love interest Rita Deveraux (Chelsea Field) resigned her position with the U.S. Department of Justice National Security Division in Washington D.C. to move back to New Orleans to be with Pride.

TV Guide spoke with Bakula and Field, who have been a real-life couple for over 20 years, about how the COVID-19 pandemic has affected the show’s production and storylines and what viewers can look forward to with Pride and Rita this season.

With the pandemic shutting down production, how did not being able to film the final few episodes of Season 6 impact Season 7 in terms of storylines? Did they just cut things? Did they move it to season seven?
Scott Bakula: Obviously, that wasn’t our finale. So we took one of the storylines, which was Hannah dealing with an abusive boss in her work world…We brought that back. We kind of tied that up in a really nice way in this season. In Episode 4, things like my daughter getting married and those kinds of things we just took what’s going on in the world and we pushed the wedding because of the pandemic. And hopefully, we’re going to get around to that in a different way than we were intending. Again, because the world has changed. Then we started telling the story this year at the beginning of the pandemic and then jump forward to present day. In essence, we’re kind of starting over again. That’s what it feels like. The world is rebooting and so are we.

How was it integrating the pandemic into the storyline? As a viewer, it felt very organic to us.
Chelsea Field: I’m sure there’ll be people that say, “Oh, I can’t watch this because there’s too much of my own life.” But it seemed like a poignant opportunity to reflect what’s going on, you know, in everybody’s lives, and hopefully doing it in a seamless way that people can say, “Oh, well, they’re wearing masks, and it doesn’t seem to be such a big deal for them. They’re just, you know, they’re altering their lives, for the betterment of everybody and they’re still going through their life.”

Bakula: The show is named after the city [of New Orleans] and the city has gone through a very difficult period of time. And the city is different, you know, you can’t buy 1000 extras to go stand on Bourbon Street anymore because we’re not allowed to have groups that large. You can’t play a great concert anymore because you’re not allowed to blow a horn in public in the city right now. So it was “How can we keep the spirit and the essence of New Orleans alive given what’s going on?” and in essence, that’s what the city is struggling with itself. So you know, little things like taking the bar that’s closed turning it into a pantry food pantry. Little things like that, that seem natural and organic. Pride loves the city, loves the people in the city. How would he get through this? How would he help them? We kept finding ways that felt right. … We do have music but in a different way and we’re just reflecting the transitions and the flexibility that everyone in the world has had to deal with.

We know that Chelsea is now a series regular. How did that come about?
Field: It was a natural progression for [Pride and Rita] to spend more time together. And also, I think one of the big advantages is that we’re actors that can actually kiss on screen, we can hug, we can hold hands, we can be close to each other. And that seems like a real advantage because there’s not a lot of people that can do that [right now] … and they came up with a really great arc for her character and a valid reason as to why she would be spending more time in New Orleans. And I think that Rita really brings a side of Pride that, you know, you don’t see all the time, it’s just a softer and more personal and a little more vulnerable side of Pride. And I think that that’s advantageous for the show.

What can you tease about their relationship? Is it pretty smooth sailing? Are there some bumps in the road?
Bakula: I think we get along really well. I think that’s kind of always been the beauty of their relationship, there’s a kind of an adult, mature relationship. They recognize each other’s work is important, they recognize each other’s individuality is important. And yet, they also really enjoy being together. So Pride is working and Rita’s got things to do that are important and meaningful. And we continue as these two strong independent yet connected adults. I find their relationship refreshing in a way and kind of not a lot of baggage connected to it. They’re having that kind of fresh start as in falling in love all over again but at a later age.

Are there any wedding bells in their future?
Field: It’s such an odd idea just because of where they are in their lives, like marriage and a wedding just doesn’t seem like something that would be important to them. You know, the things that are important to them are social justice and getting to spend time together. And the pandemic brought everything into view, you know, in terms of what your priorities are. And I mean, I don’t know that maybe the writers will write something. But if they did it, I think it would be an opportunity to look at it in a very different way than the typical, “Oh, you’ve got to get married!”

Bakula: It’s reflective of our own life. We didn’t get married for the first six years of our relationship, because we just didn’t – it was never the right time. We were working and raising kids. There’s a lot to do in the world right now. So these are two people that are interested in moving the discussion forward. So that’s really the focus, but I’m not saying it couldn’t happen.

How Grey’s Anatomy, This Is Us, and Other Shows Are Planning to Put Coronavirus Into Their Storylines

Looking ahead a bit, next week’s episode is titled “One of Our Own” and that makes us very nervous that someone on the team is possibly in trouble or going to get sick. What can you tease about next Sunday’s episode?
Bakula: No, it’s actually about police reform and some kind of historic challenges inside the police force. “One of Our Own” refers to that. … It’s a timely episode and very emotional because Pride was NOLA police force before he joined NCIS. So he has deep ties and a deep passion and desire for them to be seen in a good light. And there’s some corruption going on, and … there’s a slight nod to some unwarranted no-knock. That happens through the SWAT team at the wrong address, there’s all kinds of stuff that goes on. It’s a pretty powerful episode, two episodes. It’s a two-parter.  But it’s the world today.