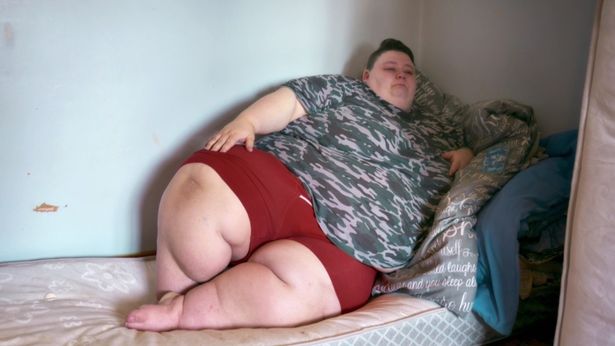 AJ has spent the last six years trapped in their house, as well as in their own body.

The super morbidly obese 24-year-old can spend 19 hours a day on a mattress in the living room – staring at the same four walls all day.

AJ, who lives in Airdrie, Scotland, is forced to sleep on a pile of pillows while using a special sleep mask because the excess weight compresses the airway.

The biggest fear for mum Sharon is that AJ will stop breathing during the night, so she sleeps beside her child on another mattress.

Even the most basic of tasks require help from Sharon, who has washed AJ for the last six years and helps with trips to the toilet.

“My role at the moment is mother to a giant baby,” admits Sharon. “It breaks your heart to see your child like this, it really does.”

As well as changing diet, exercise is part of the new action plan, which means finally leaving the security of the house.

Just 15 minutes of gentle walking if exhausting for AJ, but they refuse to get a lift home when suggested by mum.

During another session with the psychologist, Dr Williams points out that avoidance of issues has caused problems and AJ’s refusal to speak negatively about mum Sharon.

“These sessions have been an eye-opener to me. I thought I knew best. Basically I need to grow up and accept other people’s advice,” admits Sharon.

In the next episode, we discover whether AJ has done enough to be able to have surgery.

AJ realises they need to be more independent and change their lifestyle – but will it be enough?