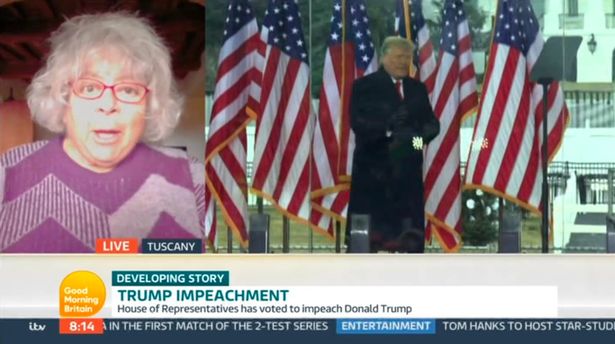 Miriam Margolyes appeared on Good Morning Britain on Thursday where she had hosts Ben Shephard and Susanna Reid in fits of giggles as she did not mince her words.

Speaking about Donald Trump and the Capitol riots, Miriam said: “Like everybody else I’m astonished and disgusted.

“I know it’s morning television and I know I have to be careful about what I say about that man.

“But he is a dangerous man, he is dangerous, I think he’s a fascist.

“And I think it’s obvious from the beginning that he was going to be like that.

“I think it looks from the beginning there was planning, a conspiracy, to invade the capital, I just long to see the back of him.

“I mean you’ve got that clown in charge there that I didn’t vote for and I’m holding him responsible for a lot of this mess,” she said of Prime Minister Boris Johnson.

“Which people didn’t realise when they voted for Brexit, that they were putting me out of my house.

One viewer tweeted: “Miriam Margolyes doesn’t hold back, does she. Love her”.

Another gushed: “Miriam Margolyes lights up the screen whenever she is on! She brings pure joy into our lives. Love that she says things as they are – slamming Trump & Boris! What’s not to love about our Miriam!”

“Miriam Margolyes is absolutely killing me off she needs to be on @GMB more often,” laughed a third.