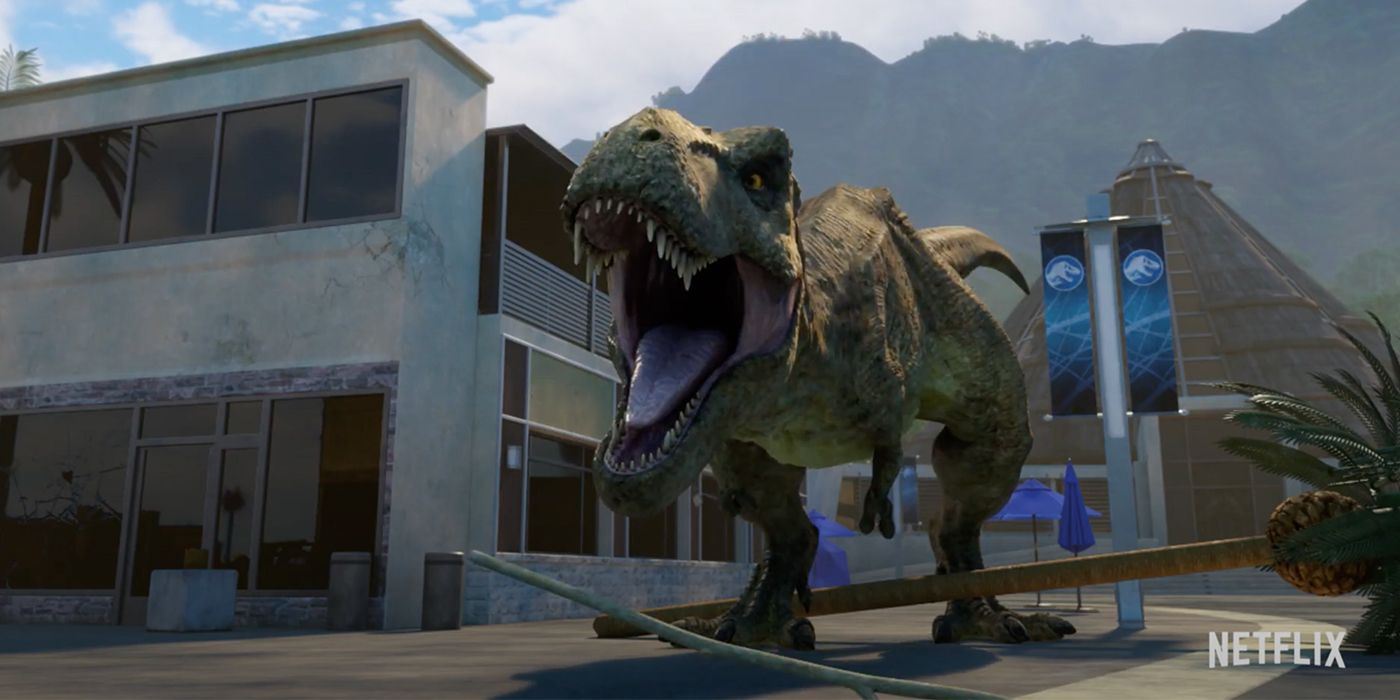 Dreamworks has released a sneak peek at Jurassic World: Camp Cretaceous season 2, which shows the park’s T-Rex is still a threat. The show’s first season released last year to a generally positive response, receiving particular praise for its beautiful animation. Season 2 looks to deliver even more excitement as the campers scramble to find a means of escape from Jurassic World after the island falls to the dinos.

No matter how many niche species and genetically-engineered monstrosities the Jurassic Park franchise tosses out, the T-Rex remains the unquestionable queen of all the dinosaurs. Brief pretenders like Jurassic Park 3’s spinosaurus and Jurassic World’s Indominus Rex have attempted to scale the throne, but the spotlight inevitably falls back on the rightful series icon. The T-Rex has been both foe and unexpected friend at different points, and it’s promising to see her playing a prominent role in Camp Cretaceous season 2.

The new clip, officially released by Dreamworks, shows Jurassic World’s T-Rex in all her threatening grandeur as the campers attempt to sneak into her lair. It looks like the crew is attempting to tap into some of the park’s systems to send a distress call to the mainland, a plotline that was alluded to in the season 2 trailer. Hacking and dodging dinosaurs at the same time is tricky business though, leading to a cliffhanger ending with Brooklynn stuck right in the T-Rex’s path. Check out the clip below:

Most of season 1’s story dealt with the buildup to the dino’s escape. Now that the island has been evacuated and the creatures are roaming free, season 2 could be a bit tenser and a lot more dangerous for its core cast. The Jurassic World: Camp Cretaceous season 2 trailer alluded to other humans still being on the island, though whether they turn out to be friendly or not remains to be seen. Season 2 will also likely detail the fate of Benny, who seemingly died at the end of season 1 but was revealed to be alive in a teasing final shot.

With Jurassic World: Dominion reuniting the stars of the very first Jurassic Park and Camp Cretaceous promising more excitement in season 2, it’s a great time to be a fan of any age. Camp Cretaceous’s initial success and the popularity of the recent films could be just the start for the series’ modern era, as branded transmedia content is only becoming more popular in the age of streaming. Jurassic World: Camp Cretaceous season 2 premieres on Netflix on January 22nd.