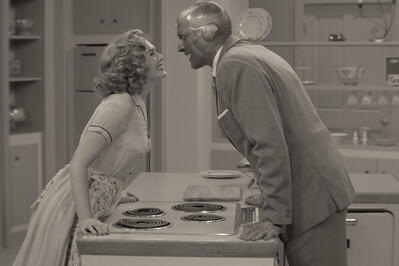 WandaVision is the first live-action episodic Marvel series to debut on Disney+, and it’s a bold swing from the studio that brought you Avengers: Endgame, Black Panther, and so many more. Elizabeth Olsen and Paul Bettany return as their MCU characters, Wanda/Scarlet Witch and Vision, in a bizarre new world that pays homage to sitcoms of the past. While Wanda and Vision attempt to fit in with their suburban neighbors and create a seemingly normal existence for themselves, it becomes increasingly clear that all is not what it seems, tinting each sitcom tribute with shades of The Twilight Zone.

Does that sound weird? It should, because WandaVision is weird. It’s funny and trippy, and feels unlike anything else Marvel Studios has put forth so far, setting a bold tone for the studio’s next chapter. There’s a lot going on in this new show, but WandaVision handles its varying elements in an intriguing and clever fashion, as can be gleamed from the first three episodes screened for critics. Each new episode replicates a different decade of yesteryear sitcoms beginning with 1950s’ I Love Lucy and The Dick Van Dyke Show in the premiere episode. The second episode tackles series like Bewitched and I Dream of Jeannie, and the third shadows The Mary Tyler Moore Show, and so on. Head writer Jac Schaeffer and director Matt Shakman make each episode feel like its own world, threading the serial story of the season through a different filter in each half-hour bite without completely disorienting the audience at every change.

At the center of the WandaVision whirlwind are Olsen and Bettany, who keep the series grounded and remind everyone that they both have bonafide comedic chops that were not fully utilized in the MCU films. Olsen makes stepping into the shoes of Lucille Ball and Mary Tyler Moore look easy as she shows off a seemingly natural flare for physical comedy. Meanwhile, a chewing gum incident in the second episode paves the way for Bettany to swing for the rafters and give a flamboyant level of performance that we haven’t seen from him since A Knight’s Tale. Wanda and Vision were often too busy having to save the world from intergalactic megalomaniacs in The Avengers films to showcase that a psychic witch and an omnipotent cyber being make a charming couple, but they truly do. Throw in Kathryn Hahn as their amusing nosy neighbor Agnes and you can see why WandaVision isn’t just ambitious, but also delightful.

It’s hard to find fault in the construction of WandaVision, at least not after three episodes. The troublesome part of the series comes from the rollout strategy, something that has to be considered as the TV landscape moves from the “Peak TV” era and settles into the streaming wars. There’s still a lot of debate about whether the drop-a-season-all-at-once binge or week-to-week model works best, but the answer isn’t a one-size-fits-all situation, it depends on the show. WandaVision will premiere its first two episodes on Friday, Jan. 15, and then release new episodes on a weekly basis thereafter. Disney+ has stuck firmly to the week-to-week model, and while that has proven to be a good strategy for other Disney+ shows like The Mandalorian, it may do WandaVision a disservice.

The Mandalorian takes place in a well-established universe and the series’ first season was mostly comprised of standalone adventures that made it feel like a space cowboy procedural. With each episode of Mando being its own adventure, the week-to-week deployment felt satisfying. While Wanda and Vision are established characters, the world of WandaVision is a new corner of the MCU that doesn’t have set rules or parameters and those are not clear even after the first third of the nine-episode season. The Star Wars series was also pretty straightforward in its premise: protect Baby Yoda at all costs. WandaVision is a slow burn when it comes to revealing the bigger picture of the series, and the first three episodes make it clear that answering burning questions from the films, like how Vision is apparently alive after Thanos (Josh Brolin) ripped the Soul stone from his head at the end of Avengers: Infinity War, is not an urgent priority. Plus, WandaVision‘s episodes are much more interconnected than The Mandalorian‘s first outing.

Why Disney+’s WandaVision Is the Perfect Start to Phase 4, According to Marvel’s Kevin Feige

Hardcore fans who have read the source material have an advantage watching this series, while those with only knowledge of the film universe — who arguably make up the biggest slice of Marvel fans at this point — and those that are coming into WandaVision completely blind may find the drip-drop pace of explanations more tedious than intriguing. The WandaVision marketing team is billing the series as a nine-episode movie — a description most filmmakers who move over to TV feel obligated to give their projects — but if that is truly the case, who do they know that enjoys watching a single movie over the course of eight weeks? Fans who are willing to acknowledge that patience is not a personal virtue may find that storing up episodes of WandaVision to watch in one go will be less frustrating.

Viewing preferences aside, WandaVision sets up an interesting path for the MCU. It proves that Marvel isn’t afraid to try new things and evolve, which not only makes us eager to see how the rest of WandaVision will pan out, but also what other surprises the rest of the Marvel Disney+ slate has in store.