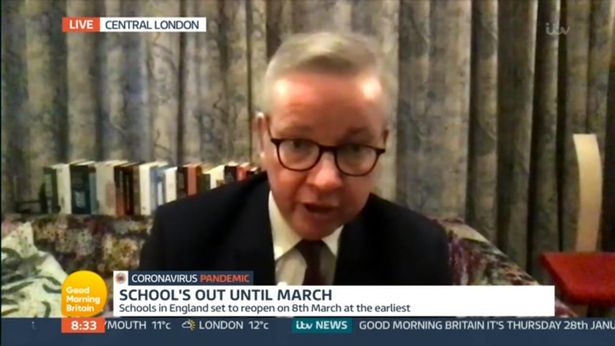 Michael Gove was confronted by a frontline NHS doctor who furious let rip at Prime Minister Boris Johnson’s claims the government “did all they could” during the coronavirus pandemic.

Palliative care physician Dr Rachel Clarke, who treats patients on the frontline with Covid-19, earlier told Good Morning Britain hosts Susanna Reid and Ben Shephard that she was “sickened” by the remarks.

Appearing on GMB later on in the programme, the MP was forced to watch Dr Clarke’s passionate response and was asked to comment.

Initially, Gove failed to answer the question and said that he was “full of admiration” for those like Rachel on the frontline.

Responding to her heartbreaking account, Ben asked: “So with that in mind, when you hear Boris Johnson say ‘We’ve done everything we can’, how does that make you and your colleagues feel?”

She replied: “I was absolutely sickened when I heard him say that because it was patently and obviously a lie. He didn’t lockdown promptly, he didn’t close down our borders, he didn’t protect our care homes, he threw vulnerable people to the wolves in care homes. He didn’t do any of the things first time round that would have helped.

“But worse, he made the same mistakes the second time round. And all of us, as doctors, are used to making difficult decisions and having to look people in the eye and say, ‘I’m sorry, I have to tell you you’re loved one is dying.’

“We can’t shirk that – that’s leadership, that’s being tough and doing a good job. Boris Johnson stands up in front of the cameras and doesn’t even have the decency to brush his hair and he looks the country in the eye and doesn’t tell the truth. He tells us what we think we want to hear and be popular instead of what’s right.

“And I can’t forgive him for that because that failure of character is having a cost of tens of thousands of lives and we are seeing these people die.”