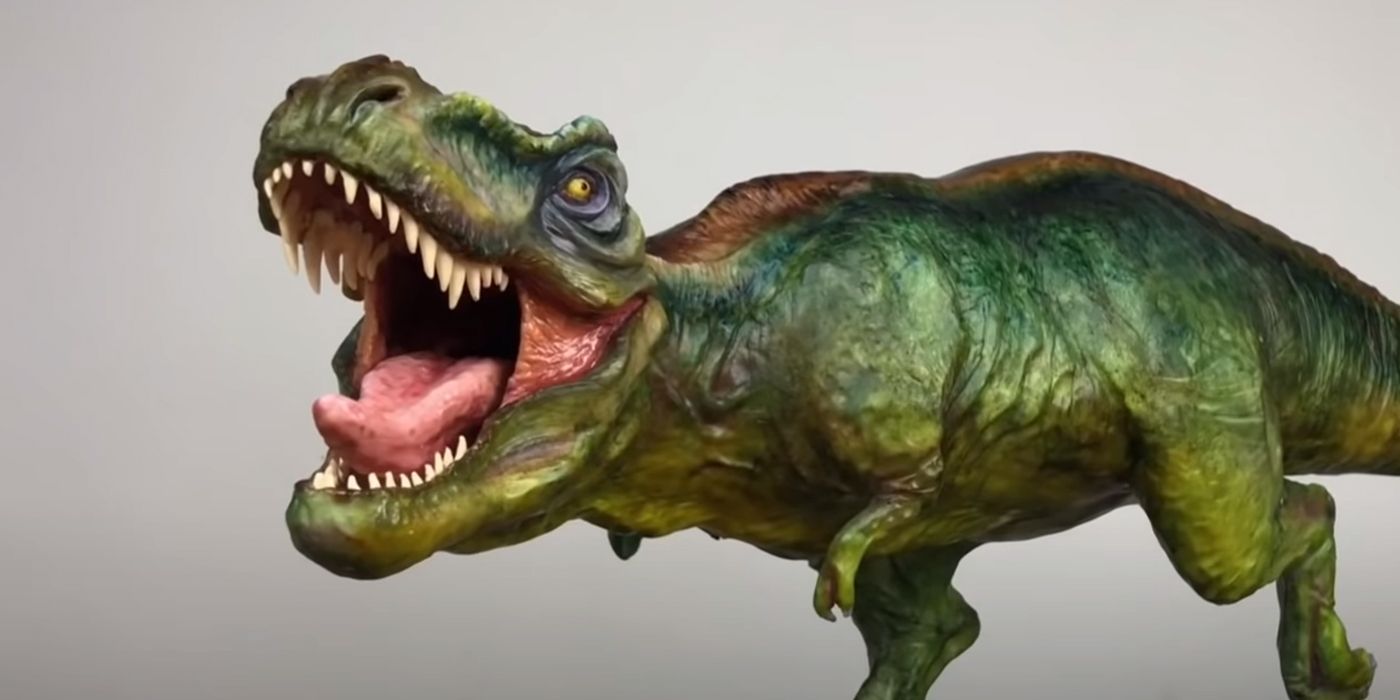 An enterprising Jurassic World: Camp Cretaceous fan has made a hyper-realistic looking T-Rex cake. As the most recent spin-off from the famed Jurassic Park franchise, Netflix’s Camp Cretaceous takes an animated look at Isla Nublar and the six teens who find themselves trapped there with a substantial cast of dinosaurs.

Because it’s an animated series, Camp Cretaceous doesn’t offer quite the same degree of intensity as the films do, but fans have generally taken to it regardless. However, it could definitely be argued that because it’s animated, Camp Cretaceous can actually do more with its characters and raise the stakes higher than a live-action film could. One example of this is the T-Rex, a creature that has long since come to symbolize everything that Jurassic Park is. Camp Cretaceous has kept the threat of the T-Rex high, and the famed dinosaur’s involvement in the series has been significant so far. For fans, Camp Cretaceous offers one of the best methods for seeing and learning about Isla Nublar’s diverse dinosaur inhabitants.

Yet no matter how many different varieties of dinosaurs that the franchise introduces, it seems that many fans will always prefer the classic T-Rex. Aside from being something of a franchise staple, the T-Rex has also been a part of Jurassic Park merchandise since the beginning. The internet is just one place where an abundance of fan art and homages to the prehistoric monster are prevalent. The latest nod to the T-Rex comes from YouTube channel Sideserf Cake Studio. The T-Rex cake was inspired by Camp Cretaceous and the process of creating something tasty looking from such a fearsome creature can be seen below:

The inside of the T-Rex is made up of confetti cake, something that doesn’t exactly scream “lethal dinosaur” but was chosen for its contrast, or “dino on the outside, party on the inside” as Sideserf states. While working with white modeling chocolate and green buttercream icing, Sideserf reveals that she used Camp Cretaceous as a reference for the T-Rex, thanks to the program’s realistic usage of animation on its dinosaurs. As any fan of the series will likely agree, the animation is indeed one of Camp Cretaceous’ strongest points. There’s a huge amount of detail in Sideserf’s cake, and while the video itself comes in under ten minutes in length, the entire process of building the edible T-Rex certainly didn’t.

At present, fans of Jurassic World: Camp Cretaceous are eagerly awaiting the third season of the series, which isn’t set to arrive until June 2022. Unfortunately, not everyone has the opportunity to chow down on a T-Rex cake between now and then, but that doesn’t stop Sideserf’s creation from being a perfect representation of one of Jurassic Park’s most frightening and beloved characters.