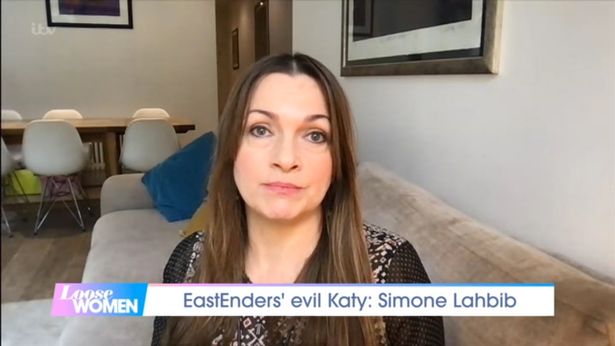 Katy abused Mick Carter (Danny Dyer) when he was a child and he fathered their daughter, Frankie, in a heart-wrenching storyline that has captured viewers.

Simone said: “When I was playing Katy I would very focused on the scenes that I was playing, interacting with Mick as an adult. I think if I spent too long actually thinking about her history and the abuse itself, it would have been more difficult to play.

“I kind of just put that in a box and focused on the scenes that I was playing, she is a very complex character.”

Simone said she felt that the casting was “really clever” as “alpha male” Mick and the seemingly gentle Katy are not the characters you might expect for this storyline, and it shows abuse can happen to anyone.

“To choose Danny as the victim, he tends to play alpha male characters and I’ve always tended to play very sympathetic, empathetic, trustworthy characters that are warm with a lot of vulnerability themselves,” she said.

Simone added that she had messages from abuse survivors who commended the way the storyline had been dealt with and thanked the soap for telling such an important story.

“I have a lot of messages from people who say, ‘This was my story, and the way you, Danny and even Kellie [Bright, who plays Mick’s wife Linda] portrayed it was exactly right’.

“That made it really hit home how important this storyline is,” she said.