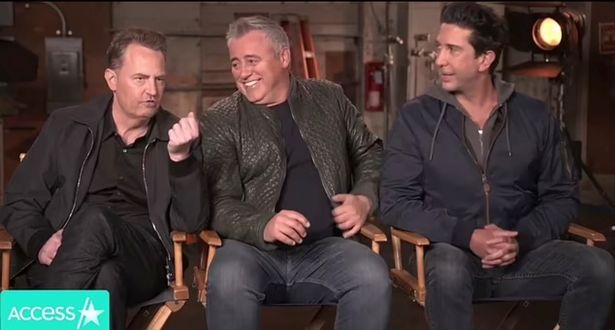 Matthew, 51, sat down with fellow cast members from the show for a “three question” interview with People about the eagerly awaited HBO Max special.

And the actor who played Chandler Bing in the hit sitcom was seen to have a glazed look and his speech was slurred, sparking some fans to question his sobriety.

The star even looked like he dozed off at one point.

However, the reason behind his slurred speech and actions has now been revealed.

A source close to the star has told The Sun that the star required emergency dental work hours prior to the interview.

However, others jumped to his defence. One fan said: “I wish people would leave Matthew Perry alone about his slurred speech already. He has a sobriety coach so it’s obviously a long term health issue he is dealing with. Slurred speech doesn’t mean stoned or drunk out of one’s mind.”

It comes after the reunion show was eventually able to be filmed amid the coronavirus pandemic.

The hugely anticipated one-off special was shot in April and will air on May 27 via HB, HBO Max and Sky.

Matthew has previously told People that things got “out of control and very unhealthy” after a 1997 jet-ski accident left him addicted to the painkiller Vicodin.

In a 2016 interview with Radio 2, he confessed that he didn’t remember three years of the show and said he “was a little out of it.”

He has recently launched a line of merchandise to coincide with the reunion episode.

The items are written in the same font as the Friends logo, and feature catchphrases that could have feasibly been said by Matthew’s character Chandler Bing on the show.