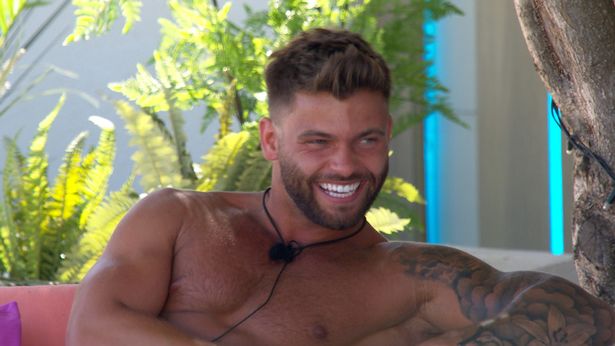 Love Island’s Jake Cornish stunned fans as he pulled out his phone to record fellow islander’s sucking toes as part of a saucy dare.

As the contestants’ first day in the villa came to an end, they faced a game of dares.

First up to take part was semi-professional footballer Toby Aromoloran, 22, whose dare read: “One of you must suck the toes of the other for 30 seconds.”

With partner 29-year-old fashion blogger Kaz Kamwi reusing to do the dare herself, Toby took one for the team.

Despite labelling the task “the worst” possible form of intimacy, he got stuck in – but as he did, Jake pulled out his phone and started recording it.

Many of those watching at home rushed to Twitter with their stunned reactions.

One fan tweeted: “HE’S FILMING IT.”

Another asked: “Why is Jake recording? I’m scaredddd.”

But one viewer, who recalled that Jake said he has a foot fetish, joked: “Ofc the one who likes sucking toes records it.”

The 24-year-old water engineer from Weston-super-Mare opened up about his foot fetish in his introductory video where he described his type on paper.

He said: “My type, all I ask for is blonde, blue eyes, little feet because I have a massive foot fetish.”

But that’s not the only thing Jake’s looking for in a girl, as he said being able to trust your partner in a relationship is key.

He said: “I’ve had messages from girls that have got boyfriends and husbands. This is why I don’t trust anyone. [I want] someone who is loyal really. But when I’m single, I like having a good time!”

Speaking of his decision to join the dating show, he explained he felt incredibly lonely in lockdown following the split from his childhood sweetheart.

Lifting the lid on his relationship breakdown, Jake told The Mirror: “We just fell out of love, to be honest.

“We were together for so long. But there is no bitterness, none of that.

“I would be lying if I said I wasn’t heartbroken when we broke up, but everything happens for a reason at the end of the day.

“I signed myself up for the show. I was in lockdown and I was lonely, I guess. I couldn’t just go out and meet girls so I thought now is the perfect time to apply for Love Island.”

Find out whether he would ever get down and dirty with another contestant on the show, here.