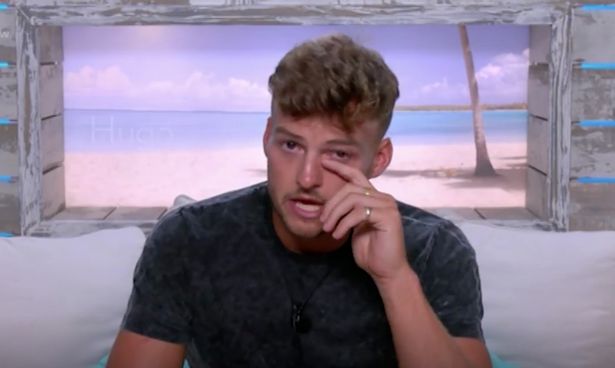 Hugo Hammond broke down in tears after “best friend” Aaron Francis was dumped from the villa on Sunday night.

The unlucky-in-love PE teacher, 24, has watched on as his time in the villa has represented more of a “Friend Island” vibe, but it appears he can’t catch a break on that front either.

After the public were tasked with voting for their favourite couple, 24-year-old Aaron and his beau Lucinda Strafford, 21, got the boot.

And while every eviction plays with the emotions of the remaining housemates, Aaron’s departure seemed to affect Hugo the most to date.

The pair embraced in an emotional hug as Hugo broke down moments before the Londoner trudged out of the main door with his bag.

Then, while speaking to the camera in the diary room, Hugo had to wipe away the tears.

The cringey conversation began with a giggly and nervous Hugo struggling to get his words out.

“Don’t worry, I’m not sticking it on you, relax,” he commented.

He eventually asked Chloe whether she thought the pair could make a go of it, leading Chloe to have to reject his advances as politely as possible.

“I just think what we’ve been through, and where I’m at, I just feel like for me it wouldn’t be romantic,” she said.

“Because of how close we are, and I wouldn’t want to ruin that.

“I just don’t know if there would be something and I don’t want to force it. If it’s not happened naturally…”

With the return of Casa Amor in Monday’s episode, maybe Hugo’s quest for love will finally be a success.