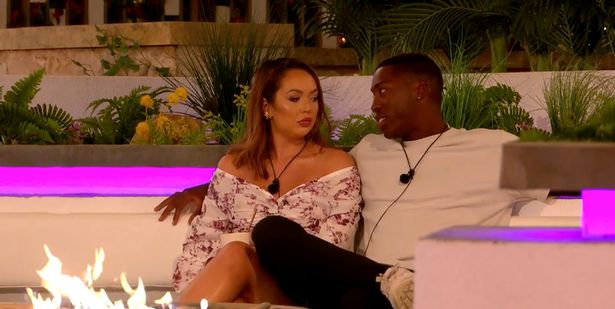 Another Love Island couple bites the dust tonight as Aaron brutally ends his brief romance with Sharon this evening, citing her row with Hugo yesterday as the reason why.

Yesterday, Hugo was left in tears after Sharon and Faye laid into him for saying that he didn’t fancy “fakeness”, infuriating viewers in the process.

Aaron was also among those who thought the row was an overreaction and subsequently gave Sharon the cold shoulder in bed.

This evening, bombshells Millie and Lucinda predictably cause chaos as they each choose to take three male Islanders on a dinner date, with each of the men creating either a starter, main course or dessert.

Yet, it looks like they’re not on the same page as Aaron tells Toby and Hugo around the fire pit about their date: “I just didn’t expect that energy confidence! I’m very surprised, but I’m going to pull Sharon for a chat.”

Later, Aaron and Sharon are alone as he tells her: “I wanted to chat after yesterday but I didn’t want to chat while emotions were still high.

How will Sharon react?