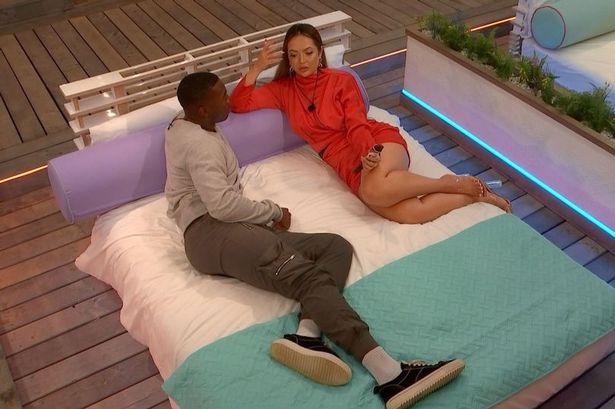 During Tuesday’s instalment of the ITV hit dating show, the contestants took part in a couple’s challenge to see how well they know each other.

Spotted sitting on the day bed, Aaron asked Sharon to “hit me with your names again”.

Despite repeating the name word for word, concerned Aaron pulled out his phone to make a note of it so he wouldn’t forget it, prompting her to shout: “Don’t text me my own name!”

Elsewhere, Toby said one of his biggest regrets was “telling a girl I loved her on the first date,” which had his partner Kaz in fits of giggles as she shouted out: “Toby you did not do that?!”

Chloe revealed her turn-offs were “horrible teeth and a bad dress sense”, while Hugo said his was girls who’ve had plastic surgery.

This didn’t go down well with the other islanders though as Faye and Sharon, who’ve both had cosmetic surgery, took the comment personally.

Faye who revealed she has had a breast enhancement, lip fillers and botox, said: “Get f***ing educated as to why girls get work done.”

While Sharon, who has also had cosmetic work done, said: “He literally has grafted for two girls in here who look like they’ve had work done. I’m f***ing pissed off. Girls do it to boost their confidence and I don’t think that should be a negative.”

After he assured them he “didn’t mean anything malicious”, the girls accepted his apology and vowed to put it behind them.