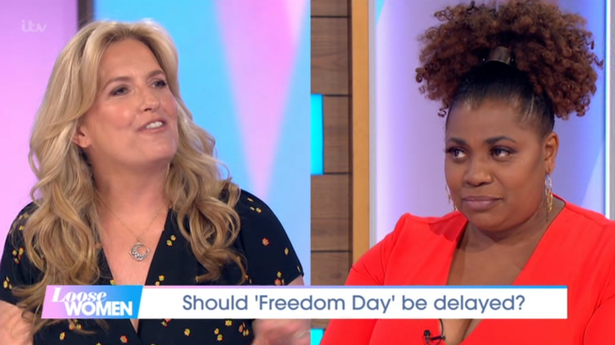 Loose Women viewers were left utterly stunned today as Penny Lancaster told Brenda Edwards to “calm down” during a discussion about the loosening of lockdown later this month.

The panelists had been joined by Ruth Langsford and Gloria Hunniford as they discussed whether ‘Freedom Day’ should be delayed.

It comes after a Government advisor confirmed that the date pencilled in for the end of lockdown – June 21st – is likely to be delayed amid the rise of the Indian variant.

Brenda, who is currently starring in Hairspray, spoke passionately about the effect of the pandemic on the hospitality and entertainment industry.

She said: “The hospitality and entertainment industries are the first ones to be effected, whether they are on-stage or whether they’re backstage, the crew.

“I know that [Gloria is] talking about getting the economy open, but I think if we do that, if we get the economy open on the 21st, then the hospitality and entertainment industry is going to once again be affected. And it’s not going to be good for morale in any shape or form.”

Brenda hit back: “What [the Government] should have done was wait until the 21st June and then see how the data is with other things that are within our country opening up before sending people [everywhere]. And you can’t have any control over people quarantining when they come back. And what is that? An Indian variant!”

Penny tried to interject as she repeated Brenda’s name, before saying: “Brenda, Brenda, calm down darling.”

Visibly shocked, Brenda made a face and she responded: “I’m very calm.”

One tweeted: “Who does penny think she is? Pc Plodelle needs to calm down with that micro aggressive behavior #loosewomen @loosewomen.”

While another commented: “Penny telling Brenda to calm down when she’s already calm and expressing an opinion just like she is. Them micro aggressions. #loosewomen.”

“Wow Penny telling Brenda to calm down darling, there’s your micro-aggression right there. I agree with Brenda. Travelling should’ve been the LAST thing to open, not the first. #LooseWomen,” another commented.

One fumed: ““Calm down darling” how patronising #LooseWomen.”

But another wrote: “I get what Brenda is saying but as someone who works in the travel industry, it’s insulting you are screaming for support for one industry and completely disregarding the plight of another (which actually has it a hell of a lot worse) #loosewomen.”