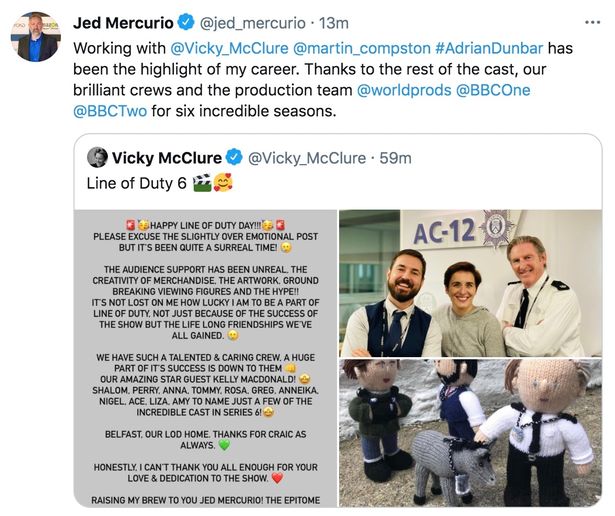 Line of Duty creator Jed Mercurio says working on the show has “been the highlight of his career”.

The Bodyguard writer, 55, took to social media to share his love for Line of Duty and its stars ahead of the show concluding its current sixth series.

Actress Vicky McClure, who plays DI Kate Fleming on the BBC One drama, had shared her own emotional message on social media on Sunday where she paid tribute to her co-stars and Mercurio himself.

Of Jed, Vicky had penned: “Raising my brew to you Jed Mercurio! The epitome of honesty & integrity.”

Now the writer has shared Vicky’s lengthy message and tweeted his own, penning on Sunday: “Working with @[email protected]_compston#AdrianDunbar has been the highlight of my career.”

The BBC official synopsis for the final episode reads: “With time running out, AC-12 attempt to unmask ‘H’, the Fourth Man (or Woman) commanding the network of corrupt officers behind the murder of Gail Vella. But sinister and powerful forces appear intent on orchestrating a cover-up.”

Will we get all the answers we seek?

*Line of Duty series six concludes tonight at 9pm on BBC One, with previous episodes available on catch-up on BBC iPlayer.