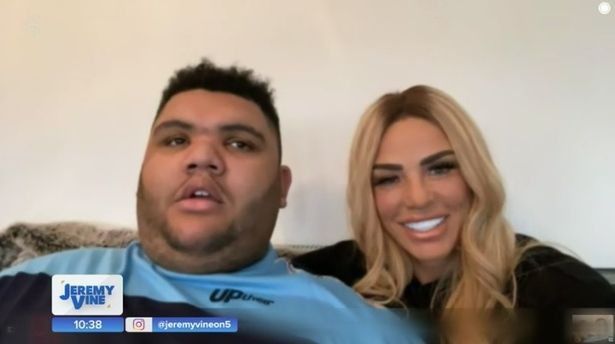 Katie Price has revealed she will be effected for the rest of life by the agonising breaks she sustained to both her feet.

The former glamour model had been making progress in her recovery after smashing bones in both her heels in a horror fall in Turkey last year, however she was forced back into moon boots earlier this month by concerned doctors.

Giving an update on her condition during an appearance on Jeremy Vine’s show today, Katie said: “It’s life-changing injuries which I’ve had. I struggled to walk. It will be like it forever.

“I smashed my feet to bits. I’ve got screws in them now and metal plates. What’s wrong with mummy’s feet Harv?”

If his move to the National Star college is successful, Harvey will be supported by trained staff there who will help live semi-independently – with his own kitchen, bedroom and bathroom.

The process was captured on camera for a new BBC documentary which sees Katie give an insight into life as single parent to a disabled child who is approaching adulthood.

In a newly released trailer for the one-off show, Katie is seen speaking to the founder of the UK Autism Charity, Anna Kennedy, who warns her that if the placement wasn’t right for Harvey it could impact his mental health and wellbeing.

“I’ve got to let Harvey have the best shot at life,” Katie told the camera.

Katie Price: Harvey and Me is confirmed to air from January 25 and will be available to stream on BBC iPlayer.