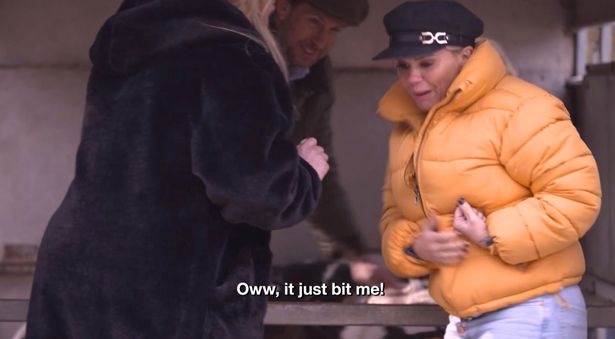 The new series, hosted by Stephen Bailey, will see the celebrities swap high heels for wellies and flat whites for flat caps, when they are introduced to day-to-day life on a working farm.

Asked just how hands on she got with the animals, Kerry, 40, replied: “Oh yeah, the ram we had to work with had got the biggest balls I’ve ever seen!

“We had to clip their nails. I just love the fact that we pimped up a ram and sent him off to play.

Asked what were the biggest challenges, Kerry replied: “I didn’t like milking the cows. I actually got a bit panicky doing that.

“We had just moved from a three-story, six bedroom house because the oldest two girls had moved out and so we thought we’ll downsize just around the corner to a two floor, four bed house.

Then both the girls ended up moving back home and Ryan’s brother moved in with three dogs in a four bed house.

It was driving me crackers! So that’s why being on the farm didn’t feel like such a shock to the system, I was used to the chaos!

* MTV’s Celebs on the Farm arrives in February