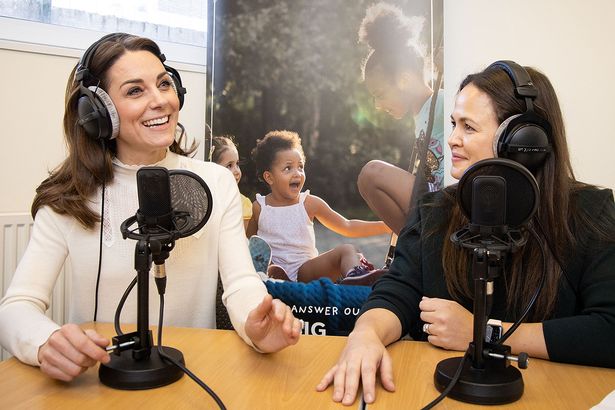 The Duchess of Cambridge made a heartbreaking admission about her children, especially her daughter Princess Charlotte, during an emotional chat with I’m A Celebrity star Giovanna Fletcher.

The Duchess admitted she experiences mum guilt when she leaves her children at home to carry out her royal duties.

While Kate doesn’t exactly have a 9-5 job, her role sees her travelling up and down the country for official visits. She’s also expected to carry out royal tours overseas, which can see her being away from home for days at a time.

Just like other mums, the Duchess says leaving her trio at home is a “constant challenge”, especially when they ask her why she’s can’t stay with them.

“Everyone had been so supportive and both William and I were really conscious that this was something that everyone was excited about and you know we’re hugely grateful for the support that the public had shown us, and actually for us to be able to share that joy and appreciation with the public, I felt was really important.

“But equally it was coupled with a new-born baby, and inexperienced parents, and the uncertainty of what that held, so there were all sorts of mixed emotions.”

Kate opened up about her difficult pregnancies saying she felt “utterly rotten” after suffering from hyperemesis gravidarum – extreme morning sickness – with all three children.

“It was fine. I got very bad morning sickness, so I’m not the happiest of pregnant people.

“Lots of people have it far, far worse, but it was definitely a challenge. Not just for me but also for your loved ones around you – and I think that’s the thing – being pregnant and having a new-born baby and things like that, impacts everybody in the family.

“You know, William didn’t feel he could do much to help and it’s hard for everyone to see you suffering without actually being able to do anything about it.

“I wasn’t eating the things I should be eating – but yet, the body was still able to take all the goodness from my body and to grow new life, which I think is fascinating.”

After much speculation Kate also confirmed she did hypnobirthing, saying she didn’t discuss the idea with William at all.

She said: “I’m not going to say that William was standing there sort of, chanting sweet nothings at me. He definitely wasn’t! I didn’t even ask him about it, but it was just something I wanted to do for myself.

“I saw the power of it really, the meditation and the deep breathing and things like that – that they teach you in hypnobirthing – when I was really sick and actually I realised that this was something I could take control of, I suppose, during labour.

“It was hugely powerful and because it had been so bad during pregnancy, I actually really quite liked labour! Because actually it was an event that I knew there was going to be an ending to.”