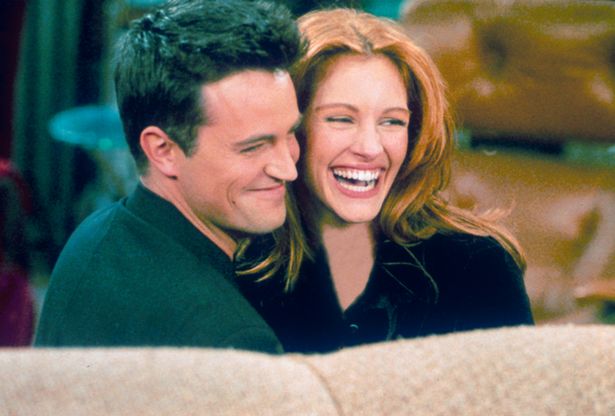 Julia Roberts appeared on Friends in exchange for Matthew Perry writing her quantum physics paper for her.

The Pretty Woman star, 53, made a memorable guest appearance in the hit US sitcom in 1996 as Chandler Bing’s love interest in the iconic two-parter dubbed The One After the Superbowl.

And it seems as though for Matthew, convincing the future Oscar winner to star in an episode of the award-winning show was harder than it sounds.

Julia cheekily suggested she’d make an appearance only under one condition – for Matthew to write her paper for her.

The sitcom’s co-creators Kevin Bright and Marta Kauffman have broken down the episode to The Hollywood Reporter in honour of the show’s 25 years.

What’s more, co-writer Jeff Astrof gave his take on what it was like to have Julia guest star in an episode with a live audience alongside her soon-to-be boyfriend Matthew.

“I remember standing with her on the sidelines. She kept saying, ‘Chandler’s so funny!’ And I’m like, ‘I wrote every one of those lines!’ I don’t know if she fell in love with Matthew on the spot but they soon started dating,” he explained.

It wasn’t long before Julia and Matthew’s on-screen chemistry blossomed into an off-screen romance.

The pair were linked from 1995 into the following year before their whirlwind romance fizzled out.