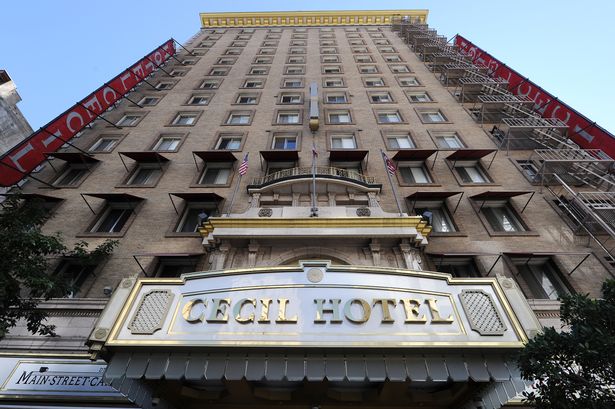 The Cecil Hotel is one of the most notrious locations for crime and bizarre happenings in the world.

The large hotel in Downton Los Angeles first opened in 1927 and ever since has been associated with crime, debauchery, and death.

First built by hoteliers William Banks Hanner, Charles L. Dix and Robert H. Schops in 1924, the Cecil was planned as a destination for toursits and businessman in the growing hotspot of Los Angeles in the roaring 20s.

However, with the Great Depression, the hotel fell on hard times.

Despite growing into a fashionable spot in the 1940s, it once again fell into disrepute as the surrounding blocks, known as Skid Row, became populated by the homeless and transients.

Since the curious case of Elisa Lam’s death, the notoriety of the Cecil Hotel has endured.

Yet, in 2017, the hotel was named a historic-cultural monument by the City Council in a unanimous 10-0 vote in Los Angeles, California.

There are continued plans to renovate the building into a mixture of hotel guest rooms and apartments.

The fifth series of the popular anthology series American Horror Story, subtitled Hotel, was set in a hotel partly inspired by the Cecil Hotel.

The hotel is now the focus of a new four-part series from director Joe Berlinger, the man behind the the acclaimed Netflix true crime series Conversations with a Killer: The Ted Bundy Tapes and and the Hollywood biopic Extremely Wicked, Shockingly Evil and Vile starring Zac Efron as the serial killer Ted Bundy.

*Crime Scene: The Vanishing at the Cecil Hotel is released on Netflix on February 10, 2020.