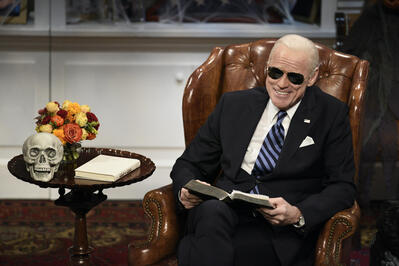 How did you celebrate Halloween? Jim Carrey’s Joe Biden kicked his off with a message to the American people in the Saturday Night Live cold open — this was, of course, the last episode of the show before the Nov. 3 election — where he came to read a scary story of potential election outcomes. Naturally, it wasn’t long before he was visited by someone who’s been in his exact position before.

“It’s a spooky time filled with demons and darkness,” he said at the beginning of his message. “Also, it’s Halloween. For some Trump voters, it’s the only day they’ll wear a mask.” He quickly began talking about the election, adding, “They say I’m eight points ahead. Poll numbers like that can only go wrong once in a blue moon,” Carrey’s Biden says, at which point he looks out the window to see a blue moon. “That’s a little troubling.”

He then pulled out a copy of Edgar Allen Poe’s The Raven, reading a modified version of the classic poem. “Once upon a midnight dreary, while Trump retweeted QAnon theories, and rifled through his Adderall drawer,” Carrey’s Biden joked. “I was writing my acceptance speech when something stopped me with a screech. ‘Twas a knock upon my chamber door.”

At which point Kate McKinnon’s Hillary Clinton entered to warn Carrey’s Biden why he should be wary going into the election.

“Raven, stop being such a drag, we got this one in the bag,” said Carrey’s Biden. “This is what every pundit says from shore to shore.”

“Not Michael Moore,” McKinnon’s Clinton replied. “He said voters are being undercounted in the polls. But even if you do win the election on Tuesday the election could still be stolen.”

“Come on,” Carrey’s Biden said. “No one will dare. I will be sworn in fair and square. All the votes will be accounted for.”

FiveThirtyEight‘s Nate Silver (Mikey Day) made an appearance too, running through the chances of Trump’s reelection before determining that “our country is haunted.” Ice Cube (Kenan Thompson) and Lil Wayne (Chris Redd) also joined Carrey’s Biden to explain why they were voting for Trump: “Taxes.”

Beck Bennett’s Mitch McConnell, sporting strangely purple hands, was next up. Bennett’s McConnell told Carrey’s Biden, “Don’t tell anyone this, but I’m kind of pulling for you. You’re doing great.”

The cold open ended with Maya Rudolph’s Kamala Harris joining Carrey’s Biden for the final send-off. “Use your voice, and use your vote,” Rudolph’s Harris told voters.