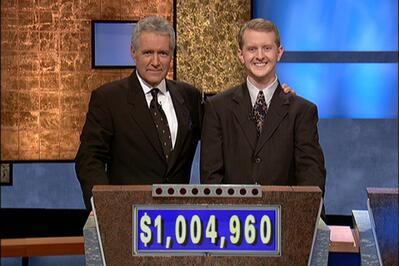 When the popular game show Jeopardy returns to production November 30, there will be a guest host at the podium. According to the Variety, the first one to step up to the plate will be Ken Jennings, one of the game’s all-time champions. Mike Richards, the show’s executive producer, said, “Alex believed in the importance of Jeopardy! and always said that he wanted the show to go on after him.”

Trebek passed away November 8 after a protracted battle against pancreatic cancer. His wish that all episodes he shot before he died should be aired is being honored and they are airing now with an In Memoriam card at the end of each episode. Richards said, “We will honor Alex’s legacy by continuing to produce the game he loved with smart contestants and challenging clues. By bringing in familiar guest hosts for the foreseeable future, our goal is to create a sense of community and continuity for our viewers.”

A longterm host will not be announced right now. Other names allegedly in the mix for hosting include Anderson Cooper and George Stephanopolous, while official announcements will be made in the coming weeks. Between Dec. 21 and Dec. 28, “Jeopardy!” will air ten of Trebek’s best episodes in celebration of the beloved host. The last episodes Trebek filmed will air the week of Jan. 4, 2021. The episodes hosted by Jennings and other guest hosts will start airing Jan. 11.

There will never be another Alex Trebek but having those who excelled at the game return to host the show is a wonderful way to carry on the show’s traditions. We’ll be tuning in to see who turns up at the host podium.

PHOTOS: Looking back at Alex Trebek’s career in pictures