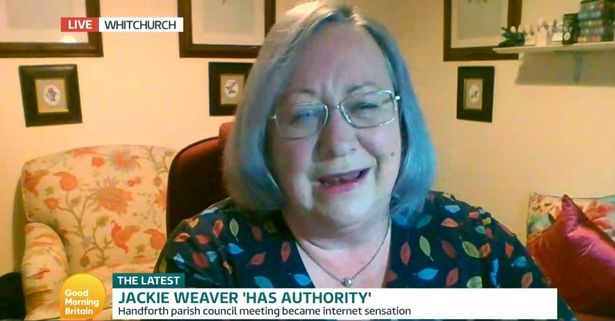 Jackie Weaver does have the authority, she claimed, as Good Morning Britain host Piers Morgan grilled her over the viral video she featured in.

Last week, a video of Handforth Parish Council’s gathering via zoom entertained the world, as the meeting descended into complete chaos.

The meeting hadn’t even started, and didn’t seem to, in the clip that saw Jackie’s authority questioned.

She then exerted her power, by removing one participant from the chat as he demanded to know the role she played in proceedings.

What followed was another participant screaming about her for blocking their fellow member, while one lady only identified as “Julie’s iPad’ interrupted proceedings to announce to someone else she was in a meeting so couldn’t talk.

She firmly responded: “I have always been very clear who had the authority in that meeting… me.”

As Susanna and Piers began laughing, Susanna brought up the moment she brutally ejected one zoom user from the meeting causing chaos.

Jackie reflected on the moment and said: “There is a serious point here that most of our legislations were written 1972 or before.

“The idea we’d even have a recorded or virtual meeting, nothing was written about that so until it is tested in case law, both sides will argue they are right.

“I’m still of the opinion that I am correct because of the way the meeting was called… the meeting hadn’t even started.”