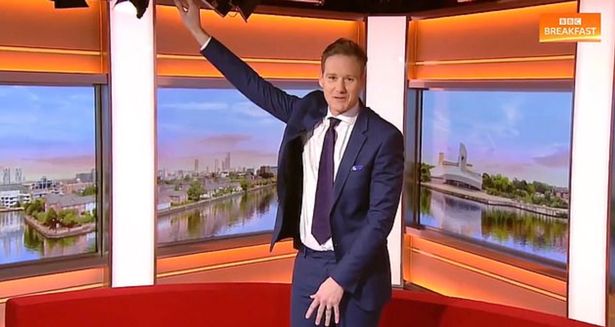 BBC’s Dan Walker accidentally punched out a light as he performed a TikTok dance live on TV.

The journalist’s efforts got everyone talking after he did the dance to the iconic BBC theme tune.

Dan was recreating the moves performed by BBC freelance journalist Katie Wong and her friends in a clip which took TikTok by storm.

It didn’t go to plan as the clumsy star accidentally struck the light with his arm, leaving him with a sore hand.

However, Dan’s bold moves certainly had the audience in stitches.

Among the sea of comments, one read: “Love it Dan walker, you have made my day.”

Freelance journalist Katie divulged to the BBC how she come up with the moves to their theme tune after becoming a TikTok sensation.

The writer said she remembered a work colleague dancing to the Channel 4 News theme tune because it was catchy.

She said: “I remembered that moment for so many years, so I said to [Amy and Thao] that we should dance to the news titles!

“Now that people are following me and it’s become so big, I’ve suddenly taken it upon myself to become the ambassador of dancing to news titles.”