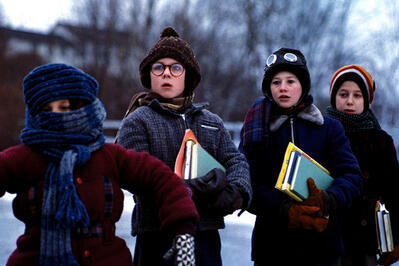 When we think of holiday classics, A Christmas Story is always on the list. It’s been over thirty-five years since it was released, but this charming tale remains a holiday essential and a familiar favorite. Adapted from Jean Shepherd’s short stories, the 1983 vignette-style film journeys back to the Christmas when then-9-year-old Ralphie Parker (Peter Billingsley) wanted nothing more than a grand new Red Ryder BB gun to show up under the tree, despite some alarming protests from certain adults in his life. “You’ll shoot your eye out!”

Ralphie’s tunnel vision about the toy remains a relatable concept of childhood — who hasn’t had at least one thing that they simply had to have from Santa? — which is why it still holds up all these years later. Though maybe not in live musical format…

5 Facts You Didn’t Know About A Christmas Story

Right now, the movie is available to watch with Hulu Live TV, TBS or TNT On Demand, or it’s available for rent from AppleTV+, Amazon Prime Video, YouTube, or Vudu. TBS and TNT are also doing their traditional 24-hour marathon of the film on kicking off at 8 p.m. and 9 p.m. on Christmas Eve respectively and going throughout Christmas Day.

If you watch during the marathon, there’s a bonus: keep an eye out for AEW wrestlers re-enacting scenes from the movie, which will be shown during commercial breaks! The scenes feature AEW wrestlers including MJF as Ralphie, Cody and Brandi Rhodes as Mr. and Mrs. Parker, Chris Jericho as Santa Claus, Eddie Kingston as Schwartz, Scorpio Sky as Randy, Ortiz as Flick, Dr. Britt Baker as Miss Shields, Ricky Starks as Farkus, Allie as Dill, Frankie Kazarian as the Elf, and Luchasaurus as the Freight Man.