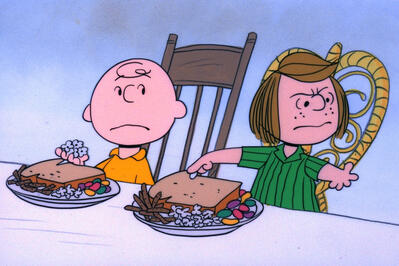 Thanksgiving is fast approaching and that means Charlie Brown and friends will be making their annual appearance with A Charlie Brown Thanksgiving! The Thanksgiving episode is the 10th holiday special in the Charlie Brown collection, and features everyone’s favorite people pleaser trying to accommodate his friends who invite themselves over for Turkey Day. There is of course a history lesson from Linus and some Snoopy shenanigans thrown in for good measure.

The Charles M. Schulz’s Peanuts holiday special is a long-beloved part of the Thanksgiving holiday for almost half a century, and this year, the viewing options are a bit different. Instead of catching the special on ABC as viewers have done for years now, the Charlie Brown collection has moved to streaming.

Beginning Nov. 18, Apple TV+ subscribers can stream A Charlie Brown Thanksgiving any time they want. From Nov. 25 to Nov. 27, anyone can stream the 30-minute short, which first aired in 1973, for free on the platform. You’ll just have to download the Apple TV+ app to watch. Before then (and after), you’ll have to subscribe to AppleTV+ for $4.99 a month to see Charlie Brown and his pals Snoopy, Woodstock, Lucy, Linus, Sally, Franklin and Peppermint Patty.

So dig in and get ready for an unconventional Charlie Brown feast!