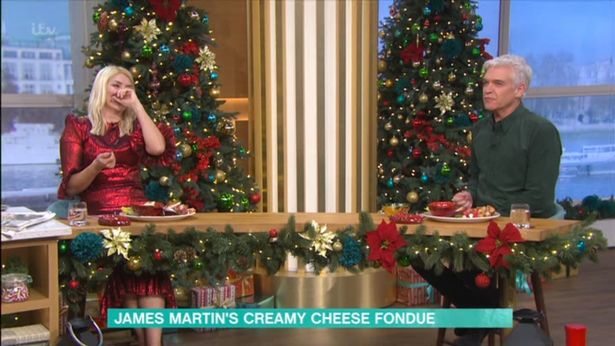 Holly Willoughby shocked Phillip Schofield when she opened up about the ‘strip’ rule she practises while eating fondue.

On today’s instalment of ITV’s This Morning, Holly and Phillip were joined by chef James Martin who was showing the presenters how to make a molten cheese fondue.

As Martin slaved over the stove in the ITV kitchen area, Holly and Phillip perched over the table to tuck into the dish.

But while Holly was trying to eat, the television presenter dropped a piece of onion into the cheesy tub and lost it.

She went on quickly to explain that the “fondue rule” meant she must remove a layer of clothing.

The television presenter then kicked her bare foot in the air underneath the table in front of her to reveal that she was actually following the rule.

Holly and Phillip were later reduced to stitches over the cheeky joke, with Holly adding: “I better not lose anymore.”