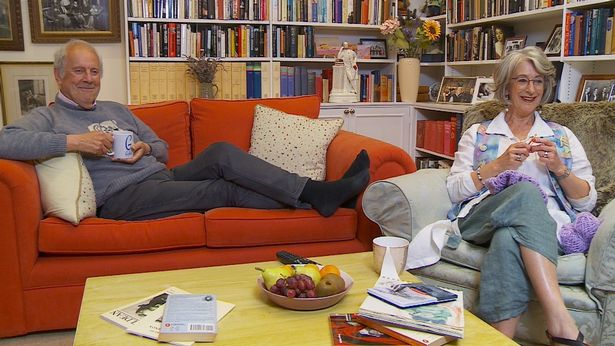 It’s been revealed that free takeaways are the key ingredient to ensuring Gogglebox reactions stay natural throughout filming.

Star of Celebrity Gogglebox, Gyles Brandreth, admits that bosses of the Channel 4 show send a perfectly timed takeaway order to make the stars of the show forget that they’re being filmed by remote cameras when they sit down to watch the telly.

The 73-year-old writer spilled the show’s secrets to Esther Rantzen on her That’s After Life podcast after she questioned why the stars always had an influx of food on show.

Esther queried: “Do the production team put eclairs and meringues and Danish pastries in front of you before sit down with whichever glamorous woman you invite (never me, I notice!) sit down?”

Gyles joked that Esther was only not asked to join him as she’s already a Dame so she doesn’t need to make an appearance.

He has previously appeared on the settee next to Maureen Lipman and Sheila Hancock.

“They come to your house at the beginning and they set up the camera in the room and then go away for two months,” he said.

“The cameras are permanently in the room and you genuinely forget they are there, they’re small discreet cameras.”

And he revealed that it’s not up to the stars themselves on what they watch.

He continued: “At set times you go in and you press the button and they don’t give you a choice over the programmes, you watch the ones they select for you, but you’re alone in the building and that lulls you into that false state of relaxation.”

*That’s After Life podcast is available on Wednesdays on captiveminds.com