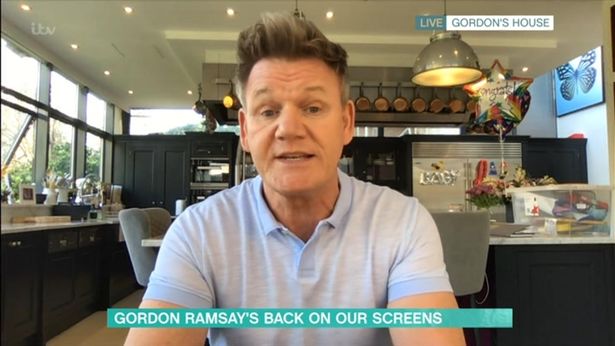 The celebrity chef – who’s recently turned game show host – told that he has to tiptoe about the set of Gordon Ramsay’s bank balance because of his heavy footfall.

Gordon, 54, joked that his feet could easily wreak havoc on Bank Balance – which entails players balancing bricks on tip of each other.

“When you can’t think of that final answer then they have to put a penalty on the board and I know that board is going to tip,” he told Holly Willoughby and Phillip Schofield.

“I’ve got size 15 feet so I’m walking around this beautiful Bank Balance set on tiptoes.

He routinely trains for two hours a day, on top of a 12-hour work day.

“I’ve just come off two weeks on crutches,” he told The Sun, “as I had meniscus surgery. I did it running up the hill in Richmond Park, bolting up it. It was f-ing painful.

“And when I got the X-rays back, the doctor said, ‘You’ve got arthritis in your knee’. I’d never heard that word in relation to me before.

“He told me I needed to start slowing down. It was a case of ‘Imagine you’ve got 1.5million steps to run over the next 30 years . . . pace yourself’.”