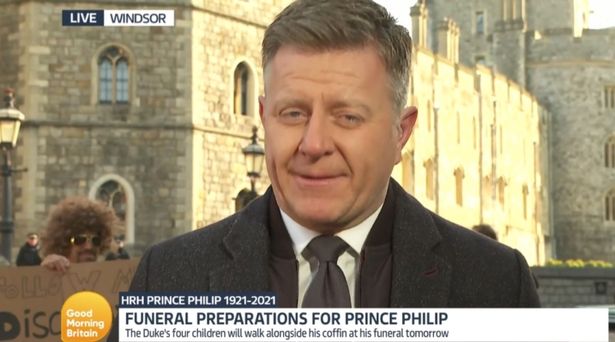 Good Morning Britain viewers were left fuming as a ‘gatecrasher’ interrupted a tributes to Prince Philip on the show.

Prince Philip, Duke of Edinburgh died on Friday last week in the early hours of the morning at Windsor Castle at the age of 99.

On Friday morning’s instalment of the ITV breakfast show, ITV Royal Editor Chris Ship was speaking to the presenters in the studio about the plans for the late Duke’s funeral.

However, as he spoke of the funeral service plans, a man appeared in the background and took the opportunity to promote his own disco website by holding up a cardboard sign.

Considering the sensitive nature of what Ship was discussing, viewers at home were irritated by the unexpected cameo.

Prince Harry, Duke of Sussex will attend but without his wife Meghan, Duchess of Sussex, who will be absent due to medical reasons and remains in their home in the US.

Other members of the House of Windsor, along with relatives of Philip’s from European royalty will also attend, as well as family friend Penny Knatchubull, Countess Mountbatten of Burma.

*Good Morning Britain airs on weekday mornings from 6am on ITV, with previous episodes available on ITV Hub.

*Prince Philip – A Royal Funeral airs on ITV from 1.15pm on Saturday.