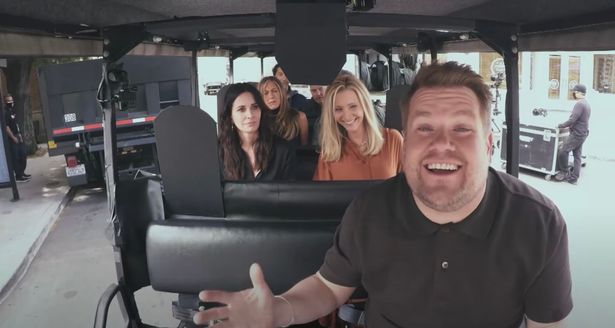 The cast of Friends delighted fans as they performed the sitcom’s famous theme song during a surprise appearance on The Late Late Show with James Corden.

The segment began with James driving a cart around the Warner Bros lot, picking up David Schwimmer, Jennifer Aniston, Courteney Cox, Lisa Kudrow, Matt LeBlanc and Matthew Perry as they reflected on the reunion.

With the scene set, James couldn’t help but kick-off an impromptu Carpool Karaoke – or Cart-pool in this case – as he turned on the Friends’ theme song, I’ll Be There For You by The Rembrandts.

James looked stunned at Matt’s comment and the rest of the cast laughed as he added: “I’m kidding!”

Jennifer then recalled: “I just remember honestly saying one time to David, ‘it’s gonna be such a bummer if the first time you and I actually kiss is gonna be on national television’… sure enough first time we kissed was in that coffee shop!”

The 52-year-old actress continued: “So we just channelled all of our adoration and love for each other into Ross and Rachel.”

Also Matt Leblanc, who played Joey Tribbiani, revealed that a drunken night out was the reason why he bagged his role in Friends.