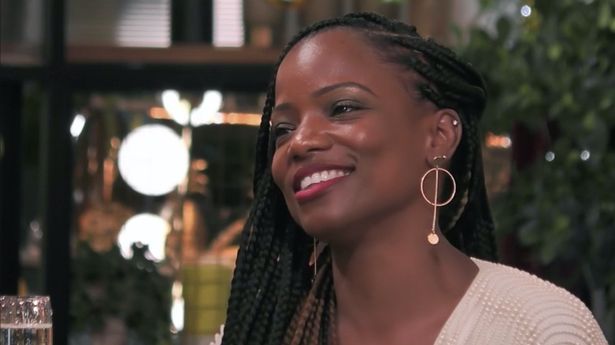 The restaurant was hoping to be a place where love could blossom and Sylthea was hoping that she would find love over dinner.

While her date didn’t really have the romantic sparks, it was her ageless beauty that caused waves with viewers, who took to social media to praise her for her good looks.

Before heading off for her date, financial investigator Sylthea spoke in the diary room and said she was looking for a man who was feeling settled with his life.

So far nothing too earth shattering but when she said that she was 42 years old, social media was lit as viewers shared their disbelief, saying that she looked at least ten years younger.

With the arrival of Dave, they had a drink at the bar before being seated at a table and the couple were soon hitting it off and finding conversation easy going.

Steak and chips were the order of the day and as Dave spoke about his five-year-old daughter, they realised that the shared the same family values.

It all came a little unstuck when Dave inadvertently called Sylthea “Sonia”.

While the pair seemed to get on well, the friendzone seemed to be their destination.

Sylthea said: “He’s interesting and I like that, and he’s different.

“I wanted to probe more. I knew there was more behind Dave. He’s not written off, if you see what I mean.”

Speaking to Dave, Sylthea said: “I think that we can get on really well as friends.

A kiss on the cheek was enough to delight Dave and he celebrated, telling the camera: “See look I got a kiss in the end! There you go.”

*First Dates continues next Tuesday at 10pm on Channel 4.