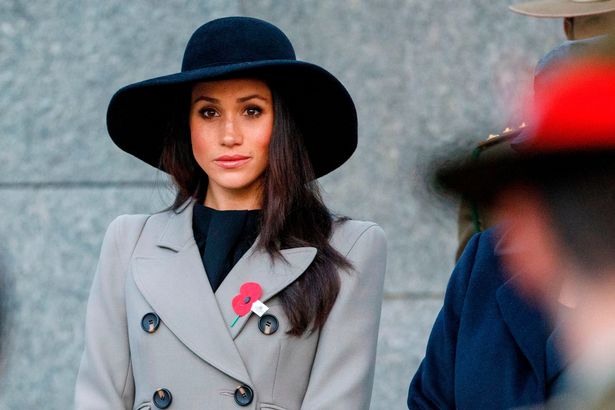 Meghan Markle is set to reveal all about her brief time in the royal family and explain her decision to quit with Prince Harry in what’s likely to be a bombshell interview with Oprah Winfrey.

The royal family and Palace staff are said to be nervous about what the Duchess of Sussex will say in the 90 minute intimate chat, which will air at the start of next month.

The interview for Oprah With Meghan And Harry: A CBS Primetime Special has already taken place, however will be reedited after it was announced last week that ‘Megxit’ is permanent and the couple have been stripped of their royal patronages.

Fans and royal critics can’t wait to hear what Meghan, who is pregnant with her second child, has to say.

It’s the latest in a string of tell-all interviews by members of the royal family, and Meghan is following in the footsteps of Princess Diana and Sarah Ferguson.

But it will have to be re-edited following Palace announcement

Oprah’s team will have to re-edited their footage following Meghan and Harry’s explosive rift with the Royal Family.

A statement from the Queen last week confirmed that Megxit is permanent, and revealed Meghan and Harry are losing their royal patronages and military titles.

It is understood the couple spoke about their roles within the royal family which have “significantly” now altered since sitting down with the US chat shown queen.

Ideally, claimed one US TV insider, CBS would like to re-shoot some of the interview to discuss the changes that have now taken place.

A source told the Mirror: “When the Duke and Duchess spoke, it was never envisaged they would have their patronages taken away.

“They didn’t see it coming and spoke as they still had roles to play.

“Now, however, other than their titles, they are to have no role in royal life – a point producers know was not discussed when Winfrey spoke to them.

“Neither the Sussexes nor the TV crew saw the fallout of their interview leading to this. Harry and Meghan thought they would retain their roles.

“But things have significantly changed for them since they eagerly sat for Winfrey and poured their hearts out.”

What time will it be on?

Meghan and Harry’s interview will air at 8pm Eastern Time on Sunday, March 7, which is about 1am on Monday morning in the UK.

It’s being show on CBS News, one of America’s biggest TV channels.

It’s unknown if any UK stations will get to show it. Meghan and Harry also have a huge deal with Netflix, so there is a chance it might be shown on the streaming service at some point.