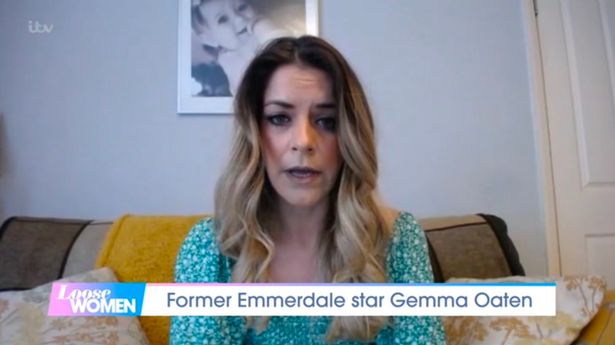 Emmerdale star Gemma Oaten, who plays Rachel Breckle, appeared on Loose Women on Thursday where she opened up on her horrific eating disorder battle that left her 24 hours from death.

Speaking to hosts Nadia Sawahla, Kaye Adams, Kelle Bryan, and Jane Moore, Gemma stressed the importance of not judging whether somebody has an eating disorder based on their weight.

She explained: “I was ten years old and in hindsight I realise it was down to the bullying, I couldn’t control what people were saying or doing to me but I could control what went inside me, but I didn’t know that, I didn’t know what anorexia or an eating disorder was.

“My parents took me to the doctor because they recognised the warning signs, god love them, but the doctor turned me away and said I wasn’t low enough in weight to have a problem.

“Cut to a year and a half later, I was admitted to a children and adolescent’s psychiatric unit and told that if I didn’t eat or drink within 24 hours I would be dead.

Host Kaye was forced to cut Gemma off so she had to quickly make her final point, and said: “Just quickly, we didn’t touch on binge eating and bulimia.

“I really want people to know that there is no stigma or shame attached to that, more and more people are struggling with it at the moment and they must reach out and get help.

“Speaking is so key – you have nothing to feel embarrassed or ashamed about.”