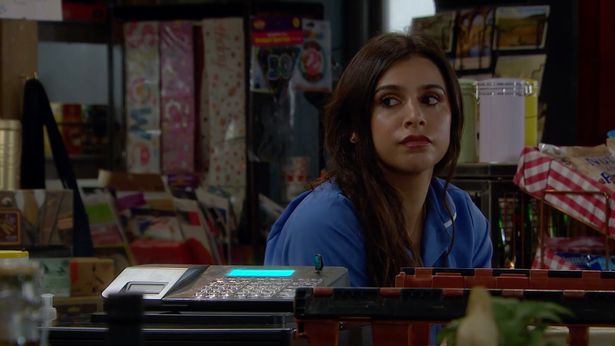 Emmerdale killer Meena Jutla watches the grief-stricken loved ones of her murder victim Leanna Cavanagh next week, not bothered by the heartache she’s caused at all.

The villain brutally killed 18-year-old Leanna last week, after she learned of her killer secret.

Leanna uncovered some items of hers hidden in a backpack, and they appeared to be valuables collected from her previous victim or victims.

There’s more to be known about her past and if she’s killed before, while she did confirm to murdering her friend Nadine just moments before pushing Leanna off a bridge.

Leanna hit her head and died from her injuries, while Meena mocked her as she lay dying – refusing to call for help or an ambulance.

Liam also issues his own apology of sorts for the way he lashed out, before asking Jacob for his help in the wake of his child’s death.

Admitting he can’t face sorting through her things in her bedroom, he asks Jacob to help him with it so he isn’t alone.

Jacob agrees, wanting to help in any way he can – while killer Meena watches on with absolutely no emotion or regret over her actions.

She even boasts to David that she was right for suggesting he should let Jacob grieve around his friends in the village, previously annoyed by his plans to take him away for a while without her there.