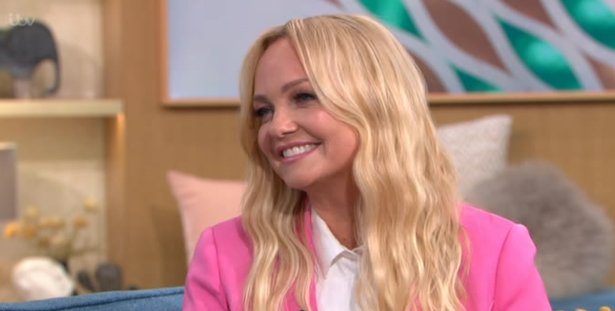 Emma Bunton, 45, appeared on This Morning on Tuesday where she spoke to hosts Holly Willoughby and Phillip Schofield about her new parenting book.

She revealed she got parenting tips from fellow Spice Girls Geri Halliwell and Victoria Beckham when she had her first child Beau, 13, and her second child Tate, ten.

Holly said: “There’s lots of personal stories about you and being a first time mum and a second time mum, and being pregnant and obviously that moment where you have to go back to work.

“It’s not easy for you being a working mum, and for you it’s even more extraordinary because you were going on tour with the Spice Girls.

“You have to go with your gut instinct as a mum and do it the way you want to do it.

“But I had the Spice Girls with me, who had their own babies, so they gave me little tips, Geri bought me a big shawl that I wrapped round myself and the baby.

“The rugby hold, I didn’t know about until Victoria told me, there was lots of that and I felt very lucky to have the support.”

Emma also revealed that despite persistent rumours there are no plans in place to make a second Spiceworld movie, or for another tour, but there are a “few little bits for the fans” coming up as the band celebrates its 25th anniversary.