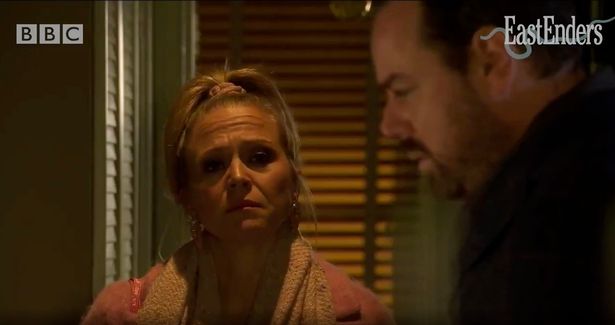 It looks like it is decision time for Linda Carter as EastEnders teases an emotional New Year’s episode in a new trailer.

Linda, played by Kellie Bright, has to decide whether she sees her future away from Walford with Max Branning (Jake Wood) or whether to try and save her marriage with Mick (Danny Dyer).

Max is heard saying how he is looking forward to starting his new life, while Mick is seen running through Albert Square as he struggles with what abusive Katy Lewis (Simone Lahbib) did to him when he was a child.

Meanwhile, Katy is worrying that her manipulation is not working.

Mick seeks Linda so that he can confide in her but when he arrives at the flat, he seemingly finds that she has already left.

EastEnders’ executive producer Jon Sen explains that the storyline is “such a vital one” for the soap to portray.

“We’ve worked closely with the NSPCC and Survivors UK since the inception of this story and as viewers have watched Mick struggle to come to terms with the truth of what happened to him as a child, we were determined to show the brutal reality and effects that abuse can cause,” he says.

“Working with the Samaritans has been invaluable to ensure that Mick’s story is true to life and they’ve been a huge support, offering guidance throughout the process.

“Danny [Dyer] gives an incredible performance and we hope his portrayal of Mick’s trauma will help dispel the stigma that survivors are often burdened with.”

The Samaritans is available 24/7 if you need to talk. You can contact them for free by calling 116 123, email [email protected] or head to the website to find your nearest branch. You matter.

*EastEnders airs tonight at 8.35pm on BBC One