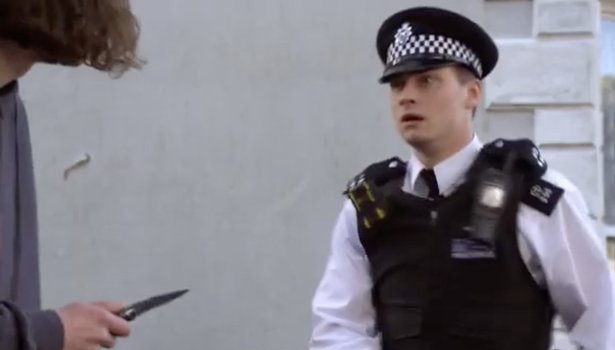 A cliffhanger saw him helpless, as a knife was pointed towards him during an attempt to arrest the man who mugged Kat Moon.

His colleague Fitzy was caught off-guard by the thief, who pulled a knife out on him and wounded him.

Callum screamed out for him to watch out as the guy approached him from the side holding the knife, but it was too late.

Both the officers were preparing to end their shift when they spotted the suspect in the mugging, and decided to set chase.

Taking to Twitter, one viewer wrote: “Oh no, poor Fitzy And Callum, he’s going to totally blame himself. This is awful, I don’t want Fitzy to die. He was going home to propose to his girlfriend.”

Another wrote: “No but Fitzy wanted to call it a day but Callum wanted to catch the mugger so he’s gonna blame himself for not just agreeing with Fitzy. I’ve had enough.”

A fourth tweeted: “I’ve got a feeling he will die and Callum will quit after witnessing it.”