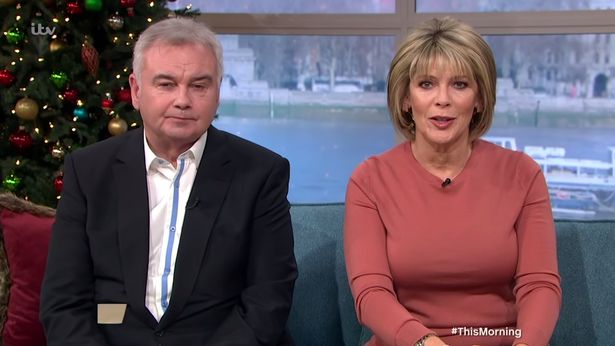 Rumours are circulating that Ruth Langsford and Eamonn Holmes are being replaced on This Morning.

And the TV couple, both 60, are reportedly “not afraid to start a TV war” if bosses decided to give them the boot in favour of Alison Hammond and Dermot O’Leary.

According to an insider, Ruth and Eamonn feel “angry” that they could no longer be hosting the much-loved show on Friday’s and plan to front a rival show on a different channel if they are handed their notice.

The TV insider told Heat: “They are now planning their own TV talk show to rival This Morning, hopefully on the BBC or Channel 4. They’ve had lots of offers from TV companies who are keen to snap them up, and neither of them are afraid to start a TV war, just like Richard and Judy did when they went to Channel 4.

One typed after Friday’s instalment: “Eamonn and Ruth are the best presenters on there. Would love to have them full time on there. Shall miss them.”

A second added: “Is this for real?! Alison & Dermot replacing Ruth & Eamon?! SURELY NOT…. @RuthieeL and @EamonnHolmes are my faves!!! They make @thismorning do not let them go!!!!”

Another praised: “Classic bants between Eamonn and Ruth today. @thismorning, their chemistry is IRREPLACEABLE; you are making a big mistake. #ThisMorning.”