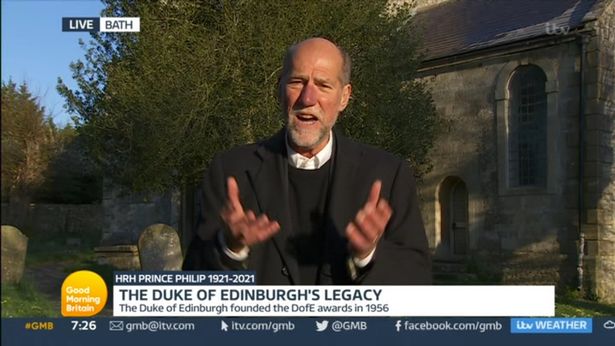 The Duke of Edinburgh’s friend Martin Palmer appeared on Good Morning Britain on Friday ahead of the funeral on Saturday, and spoke to hosts Charlotte Hawkins and Ben Shephard.

Martin, who worked with Prince Philip on conservation for more than 36 years, said: “Quite honestly, he was a great mate, and you can’t say that about many people, but I can say that about him.”

Charlotte asked: “And you liked to have debates with him, did you ever worry about crossing the line with such a senior royal, did you ever think, ‘Perhaps I shouldn’t say that?’

“Or was it never an issue?”

“No, that was never even an issue,” replied Martin.

“At the end, we had been at it for about half an hour, and I said, ‘Right, enough, I am going to get you a cup of coffee’.

“I went downstairs and all our Greek colleagues were there, and they said, ‘Will he put you in the tower?” laughed Martin.

“I said no, if I haven’t argued with him he might have put me in the tower!” he added.

Ben said: “Yes, that’s the sort of thing he embraced, lovely to hear your memories of him.”