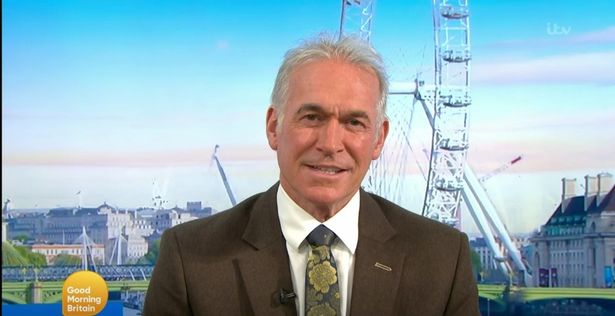 Good Morning Britain’s Dr Hilary Jones has advised against people not social distancing in huge crowds, as large groups of football fans were seen celebrating across the country last week.

London’s West End was packed out with thousands of fans supporting Scotland, who took on England in their Euro 2020 match on Friday.

After thousands of Scots made their way to London for the big moment, many football fans were slammed as “irresponsible” after a lack of social distancing, and a huge amount of litter being left outside pubs and bars.

But GMB host Adil Ray “sympathised” with the fans after the government failed to set up a fan zone, or stop anyone from travelling to the area ahead of the big game.

“And I think that’s okay outside. Hilary, were you concerned as a doctor when you saw all of these crowds outside?”

Hilary then had his say on the matter, sharing concern over a third wave and the fast spread of the Delta variant.

He explained: “As we just heard with those very words, it is not ideal. That is how viruses get spread, with people not socially distancing. It is still important you know.

“We saw nearly 10,000 cases nearly every day in the last seven days, so the variant is still spreading quite fast.

‘So even if there is a third wave and it looks as though we are heading into one, hospitalisations are down, the data is looking god.

“But no, those kinds of crowds are not a good idea. It would have been better if they had have been more socially distant.”

It comes after experts have warned a third wave of the virus is already underway in the UK, due to the quick spread of new variants.