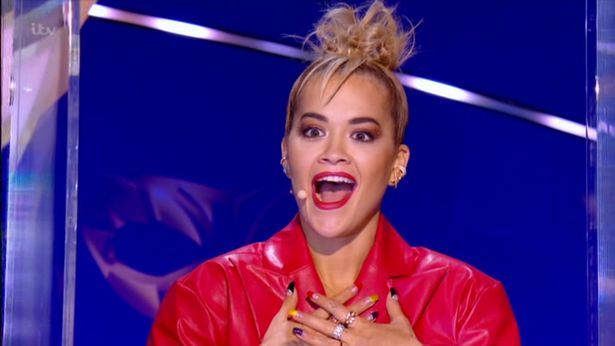 Steamy scenes on tonight’s Masked Singer as Rita Ora flirted up a storm with Robin.

The character – who’s yet to be unmasked – put on a belter of a performance, before throwing a few smooth one-liners Rita’s way.

“I feel so lucky!” Rita gushed, “Robin, that was a beautiful performance, your voice is unbelievable, that was a very sexy way of singing an Ed Sheeran song.

“It was all lovely and sensual.”

And Rita hedged her bets on the celeb behind the mask being JLS’ Aston Merrygold after seeing his dance moves, while Mo Gilligan reckoned it was Olly Murs.

“It just felt so utterly counter-intuitive that I had to do it,” Sue laughed after her unmasking, “I’m usually up a mountain or down a river these days – so I’m probably the last person that anyone would think of in a musical entertainment context.

“I got an awful lot of joy out of hoodwinking the panel.”

And revealing the inspiration behind her cryptic clues, she explained: “The clues came from interviews I did with production, and I was really impressed with the way they drip-fed the information across.

“For me, 90 percent of the fun as a viewer of TMS is trying to guess the person behind the foam padding.”