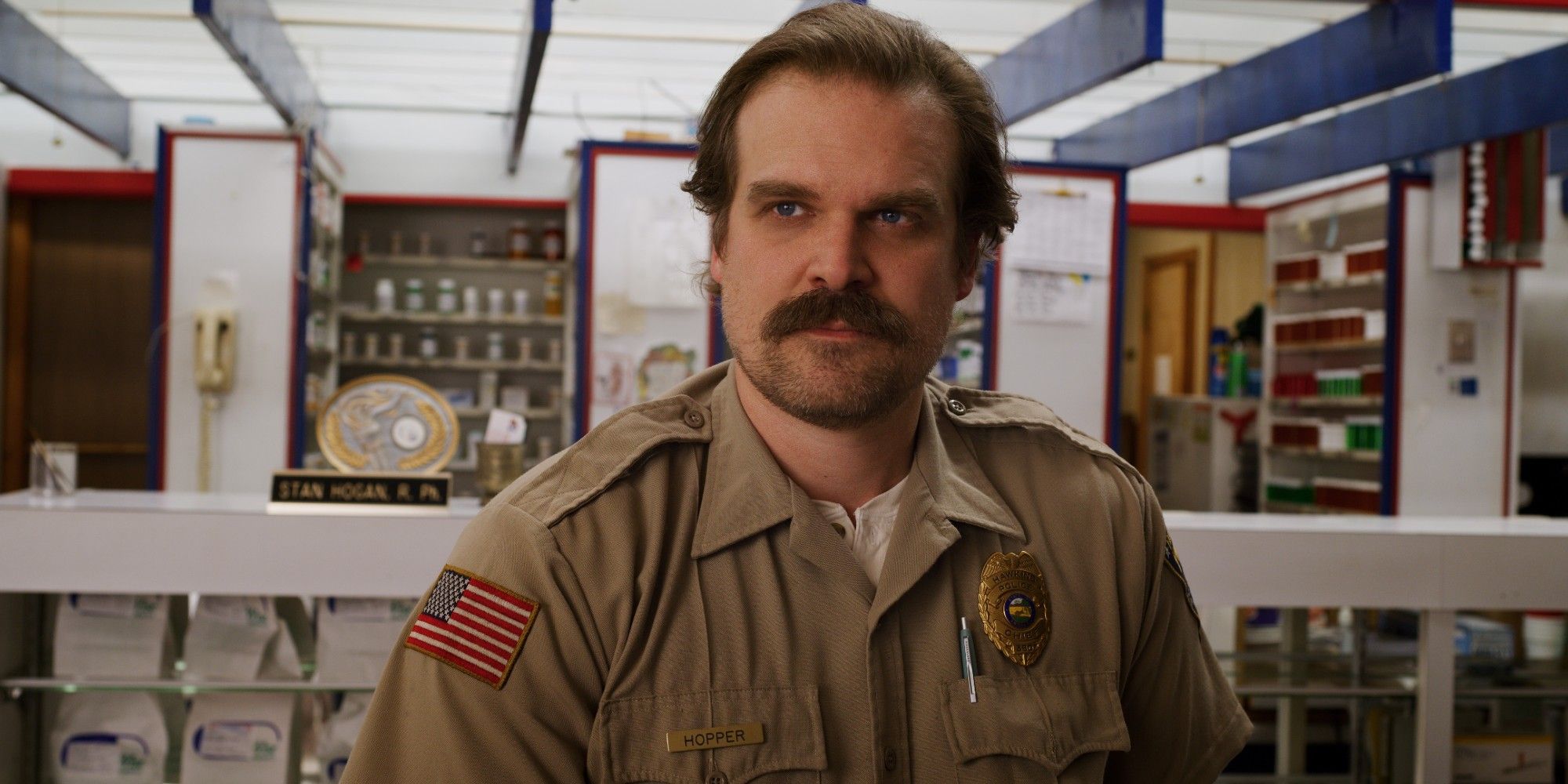 David Harbour has fans puzzled after his cryptic Instagram response to the Stranger Things season 4 trailer. Stranger Things first hit Netflix in 2016 and instantly became a hit for its homage to ’80s science fiction and horror. Fans have been anxiously awaiting season 4, especially considering it has been almost 2 years since season 3 dropped. Unfortunately, the pandemic has hindered progress of the newest season, with star, Finn Wolfhard, announcing season 4 may be delayed until 2022. Despite the delay, the release of season 4’s trailer on May 6th is keeping the anticipation steady.

The season 4 trailer of Stranger Things largely focused on Eleven and Dr. Brenner, leaving fans with more questions than answers. It appears to be a flashback to Eleven’s time in Hawkins National Laboratory where she was a test subject for Project MKUltra. The trailer reveals what appears to be Eleven’s “siblings” wearing the signature hospital gowns and referring to Dr. Brenner as “Papa,” confirming that Eleven and Eight (a.k.a. Kali) were not the only test subjects, and that there are more children out there like them. Eleven, however, is separated from the others behind a heavy door labeled with her name. The trailer ends with Dr. Brenner asking, “Eleven, are you listening?“

Perhaps more perplexing than the trailer, was Harbour’s cryptic response to it. Harbour, known for playing Hopper on the series, shared the trailer on Instagram alongside a caption of “Over the Rainbow” lyrics. To add to the confusion, the official Stranger Things Instagram account commented with three rainbow emojis. Immediately, fans began swarming the post with questions and demanding Harbour to explain what he means, but Harbour has remained tightlipped and has not yet revealed any more clues. Check out Harbor’s post below:

A significant part Harbour’s post is the mention of rainbows. Fans will recall from season 2, Eleven’s mother repeating “rainbow” over and over again in reference to the Rainbow Room – Eleven and Kali’s playroom in Hawkins Lab. The Rainbow Room is glimpsed again in the season 4 trailer. Fans will also remember that, oddly enough, Harbour’s post isn’t the first time season 4 has alluded to the Wizard of Oz. The first announcement for Stranger Things Season 4 ended with the caption “We’re not in Hawkins anymore.“

It is unlikely that fans will discover the meaning behind Harbour’s post until season 4 debuts. With the pandemic throwing a wrench in the plans for season 4, the creators and actors will have to find ways to keep fans interested in the meantime. Harbour’s post contributes to the huge pit of fan theories that already exist surrounding Stranger Things season 4. What it does for sure is confirm that the Rainbow Room will be an important part of the upcoming season, which in turn indicates a deep dive into Eleven’s past, details about her siblings, and perhaps a reveal of Dr. Brenner’s status and whereabouts. His post may also hint at the Stranger Things‘ time travel theory, indicating that, like in the Wizard of Oz, the characters may find themselves in a vastly different time and place than Hawkins. While season 4 may still be a ways away, the actors and creators of the show are leaving a bread trail of hints and references for fans to follow. The only question that remains is if we can make sense of it all.