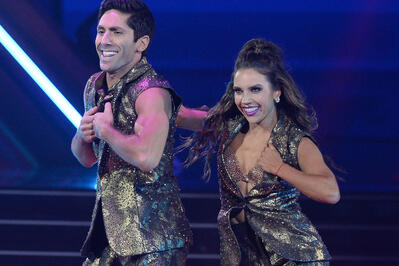 Dancing with the Stars pulled out all the stops for villains night. Host Tyra Banks and the three judges — Bruno Tonioli, Carrie Ann Inaba, and Derek Hough — kicked things off with a found-footage Blair Witch-style opening about how the contestants are all changing into villains. Then they were each dressed as a famous villain in the ballroom. Bruno was Beetlejuice, Carrie Ann was Pennywise, Tyra was the Mistress of Darkness, and Derek… well, we thought he was Two-Face, but Tyra said he was Dr. Jekyll and Mr. Hyde. Could go either way.

Here’s how everyone did and who was sent packing tonight.

Jeannie Mai and Brandon Armstrong
Dance/Song: Paso Doble / “Maneater” by Nelly Furtado
How They Did: Jeannie’s villain was Hannibal Lecter, which was… a little weird. Sexy Hannibal Lecter is not something we thought we’d ever see, plus they ditched the Silence of the Lambs motif fairly early on, which was actually kind of a bummer. They should have leaned into Lecter more. But the actual dancing was terrific, very crisp and dramatic like a paso doble should be. Jeannie even pulled off one of those tricky floor spins that you usually only see the female pro dancers attempt. The judges agreed.
Score: 25/30

Johnny Weir and Britt Stewart
Dance/Song: Viennese Waltz / “Creep” by Vincent
How They Did: Johnny’s villain was a vampire, but his routine was much more about him being told he couldn’t be gay if he pursued figure skating and how his mom supported him. It was incredibly emotional and incredibly well done. Johnny’s skating background made him perfect for this type of flowing, lyrical dance. The only problem was that both the overwrought vocalist and the fog machine were on overdrive and it was really detracting from the beautiful dance. That could have maybe been a little more delicate and stripped down. But anyway, the judges loved it.
Score: 27/30

Chrishell Stause and Gleb Savchenko
Dance/Song: Paso Doble / “In the Air Tonight” by Helmut Vonlichten
How They Did: Chrishell’s villain was Maleficent, which is maybe the best villain of all time. They also leaned hard into their motif, which worked very well. The dance felt very combative between Maleficent and Prince Phillip (Gleb) and was super intense, especially because she killed him at the end! Dark. Jeannie’s paso should have been more like this one.
Score: 26/30

Monica Aldama and Val Chmerkovskiy
Dance/Song: Jazz / “Fever” by Beyonce
How They Did: Monica was Nurse Ratched from One Flew Over the Cuckoo’s Nest, though they definitely went with the Netflix version played by Sarah Paulson rather than the 1970s version played by Louise Fletcher. Anyway, Monica’s athleticism let her pull off some very impressive moves, but the dance felt a little disconnected, like they were just moving from flashy move to flashy move instead of performing a dance routine. It definitely wasn’t smooth jazz. It was also way too sexy to fit with the Ratched theme. It was too bad more pairs didn’t really lean into their villain like Chrishell and Gleb did.
Score: 22/30

AJ McLean and Cheryl Burke
Dance/Song: Tango / Theme from Psycho
How They Did: In the pre-performance package, they showed how Cheryl took a hard spill in rehearsal and hit the back of her head on the ballroom floor. But fortunately, she rallied, and she and AJ did a great job with their tango. The Psycho score actually made surprisingly good tango music and their fancy footwork looked really good — the degree of difficulty looked really high.
Score: 26/30

Nelly and Daniella Karagach
Dance/Song: Argentine Tango / “I Can’t Feel My Face” by The Weeknd
How They Did: Nelly had on some killer Freddy Krueger makeup, but even that wasn’t enough to distract from the fact that he’s just not a great dancer. He tried really hard, but Daniella was really carrying the routine, which is something that has always annoyed us about this show. Male celebrities can be made to look so good by a flashy female pro and it’s a lot harder for the opposite to happen. The judges praise Nelly a lot, but his bar was not very high, plus even Derek said that Daniella could not have done “all those amazing things” without Nelly being so solid. Which is a polite way of saying that Nelly just stood there while Daniella did the heavy lifting. Hmph. But then they gave him all 9s. It was outrageous that this routine got a 27 and Chrishell’s routine got a 26.
Score: 27/30

Justina Machado and Sasha Farber
Dance/Song: Tango / “Take Me to Church” by MILCK
How They Did: The costume and makeup were on point for this routine and they did some really cool things to make it look like Justina had Carrie’s telekinetic powers. Justina also did a great job holding her frame, the whole thing was very intense, punctuated by Justina’s screams. Way to lean into the theme.
Score: 26/30

Nev Schulman and Jenna Johnson
Dance/Song: Paso Doble / “Swan Lake Remix” by District 78
How They Did: Their Black Swan paso doble was the best dance of the night (and we wrote that without seeing the final two dances). It was super intense, Nev showed off some impressive athleticism, and they really incorporated the film’s motif. Incredibly well done.
Score: 30/30

Skai Jackson and Alan Bersten
Dance/Song: Argentine Tango / “Everything I Wanted” by Billie Eilish
How They Did: This was a very good dance in the technical sense — Skai is so petite and such a good dancer already that she can do some pro-level moves. However, the music did not fit the theme or the dance and it did not flow at all. It felt like the most disconnected, passion-less dance of the night. The energy level was super low, the whole thing was kind of a mess. But technically, it was outstanding, so Skai should certainly not be in danger of going home.
Score: 27/30

Kaitlyn Bristowe and Artem Chigvintsev
Dance/Song: Paso Doble / “Disturbia” by Rihanna
How They Did: Kaitlyn’s Cruella de Vil getup was spectacular, it fit the intensity of the dance really well. Kaitlyn is definitely one of the strongest competitors, she did a great job this week. Every year on this show, some celebs get by on personality and others are talented enough at dancing to execute the moves really well, but the really great ones can do both. Kaitlyn can do both. This wasn’t quite as good as Nev and Jenna’s paso doble, but it was very good. We totally disagree with Carrie Ann giving her a 7.
Score: 24/30

Elimination: The bottom two couples were Jeannie Mai & Brandon Armstrong and Monica Aldama & Val Chmerkovskiy. The judges voted to save Jeannie and Brandon, which meant Monica and Val were eliminated.