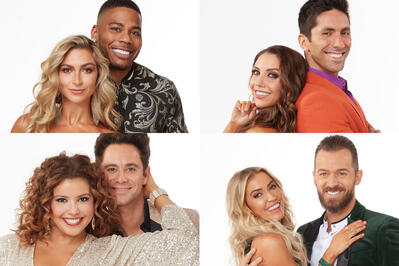 Dancing with the Stars season 29 finale kicked off with a stunning performance by the eliminated professional dancers to “Flashdance (What a Feeling)” and then Tyra Banks strutted out to “I’m So Excited” by the Pointer Sisters wearing a blue ballgown that made her look like a very fancy cake and some earrings that may or may not have been the Deathly Hallows.

Tonight, each finalist is doing one repeat dance and one freestyle dance. Scroll to the bottom to find out who won.

Kaitlyn Bristowe and Artem Chigvintsev
Dance/Song: Argentine Tango / “Toxic” by Britney Spears
How They Did: This is a good choice for a repeat because it was arguably Kaitlyn’s best dance of the season. Of course, there’s always the chance they can’t live up to the first time they performed it — they are sharp and dramatic, but the dance feels a little low-energy to me. However, the judges disagree, they heap on the praise.
Score: 30/30

Nelly and Daniella Karagach
Dance/Song: Samba / “Rhythm of the Night” by DeBarge
How They Did:  Now this is a good repeat dance because the original score was 24, so there’s a ton of room for improvement — and improve he does. Nelly has come a really long way since this competition started and this samba is terrific. Nelly still can’t quite dance at Nev or Kaitlyn’s level, but goodness, he has improved, and he looks like he’s having an absolute blast.
Score: 27/30

Nev Schulman and Jenna Johnson
Dance/Song: Paso Doble / “Black Swan Swan Lake” by District 78
How They Did: Again, this is another one that got 30/30 the first time, so there’s really nowhere to go with it, but despite that, Nev and Jenna turn in an excellent performance. It is just as dramatic as the first time and unlike Kaitlyn’s, this one is super high energy. There’s just an intensity here that that is palpable.
Score: 30/30

Justina Machado and Sasha Farber
Dance/Song: Cha Cha / “Respect” by Aretha Franklin
How They Did: This is a delight from start to finish. Justina is having a blast out there, just like Nelly. The nice thing about those two is that the pressure is kind of off of them. The other two are probably the frontrunners, so they seem a little tense. Justina and Nelly, meanwhile, just get to go out there and have fun, so they are killing it. So joyous. This was also a great repeat dance because it was one of Justina’s lowest scores the first time she danced at a 21/30 — she improved by leaps and bounds.
Score: 30/30

Nelly and Daniella Karagach
Dance/Song: Freestyle / “Savage” by Megan Thee Stallion and “Hypnotize” by The Notorious B.I.G.
How They Did:  This is a lot of fun. It’s like if ballroom dancing met grinding at the club. There are some flash lifts and Nelly really gets to show off his hip hop moves.  It might turn off some of the older viewers in the audience, but I really enjoyed it.
Score: 30/30

Kaitlyn Bristowe and Artem Chigvintsev
Dance/Song: Freestyle / “Sparkling Diamonds” from Moulin Rouge
How They Did: This was not my favorite freestyle — it might be the moment Nev secured his win. It’s a very 1920s, flapper routine but with some funky elements thrown in, which is a terrific motif, but the dance falls a little flat for me. It was good but not great. However, the judges go nuts for it.
Score: 30/30

Nev Schulman and Jenna Johnson
Dance/Song: Freestyle / “Singin’ in the Rain” by District 78
How They Did: Well, if Kaitlyn’s freestyle didn’t lock up the win for Nev, this sure as heck did. This Gene Kelly-esque routine to “Singin’ in the Rain” is phenomenal. PHENOMENAL. Nev deserves to win, so if he doesn’t win, it will be a major misstep by the voters.
Score: 30/30

Justina Machado and Sasha Farber
Dance/Song: Freestyle / “Let’s Get Loud” by Jennifer Lopez and “Bamboleo” by The Gypsy Kings
How They Did: This is a super cute routine, but it’s kind of a shame the show didn’t end on Nev’s freestyle. Dancing-wise, that routine was just so good. But Justina is a little ball of energy and just so fun to watch, so it makes sense that they would end on her.
Score: 30/30

The Winner: The fourth-place pair is Justina/Sasha, followed by Nelly and Daniella in third. The second-place couple is Nev and Jenna, which means Kaitlyn Bristowe is the season 29 winner. Wow. That is a bit of a surprise.