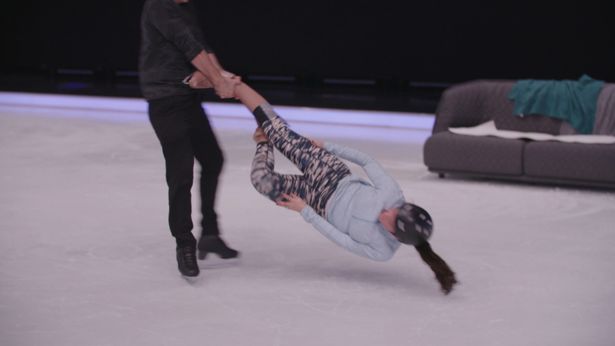 Dancing On Ice star Rebekah Vardy has admitted she’s “petrified” her headbanger on tonight’s show will end in disaster after so many stars suffered injuries.

The ITV skating show has been plagued by accidents, with two of the contestants being forced to quit and several pros being hospitalised.

Rebekah, 38, is taking on one of the show’s riskiest moves in tonight’s live show – the notorious headbanger in which her partner Andy Buchanan will swing her around by the ankles.

The WAG has admitted she’s scared something will go wrong because DOI has been blighted by so many other accidents.

However, she’s putting her complete trust in Andy and will give it her best shot.

She told The Sun On Sunday: “It’s petrifying, but I’m an adrenaline junkie and I trust Andy completely.

“I know he would never let ­anything bad happen to me. It’s given me a vote of confidence to be able to do those things.

Denise van Outen, 46, was forced to withdraw in January after a nasty fall which left her in “unbearable pain”.

She suffered three bone fractures and a partial dislocation of her shoulder and was later told by doctors she had to pull out.

Just days before, Rufus Hound was forced to leave the competition after he come into contact with someone who tested positive for coronavirus.

Bosses have already used up both of their reserves – Matt Richardson for Rufus and gymnast Amy Tinkler for Denise, so they have no more skaters to put on the ice.